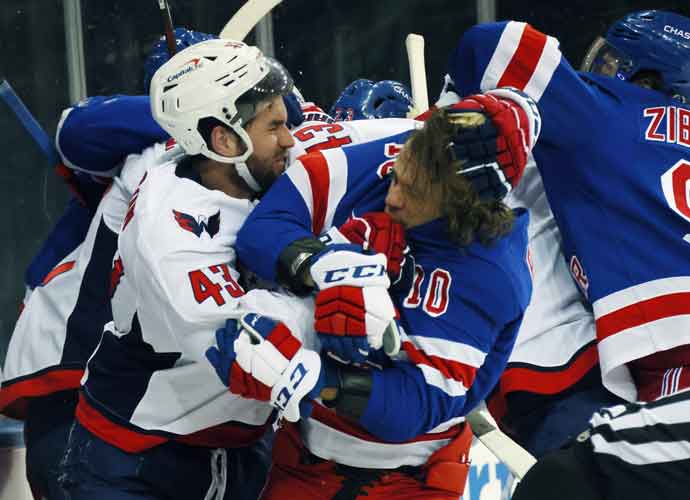 NEW YORK, NEW YORK - MAY 03: Tom Wilson #43 of the Washington Capitals takes a roughing penalty during the second period against Artemi Panarin #10 of the New York Rangers at Madison Square Garden on May 03, 2021 in New York City. (Photo by Bruce Bennett/Getty Images)

The NHL announced that it will only fine Washington Capitals right wing Tom Wilson for a recent hit.

The incident occurred on Monday night when the Capitals were facing off with the New York Rangers. The two teams got into a scuffle in the second period. Wilson repeatedly punched Pavel Buchnevich in the head once Buchnevich was down on the ice after the play was stopped. Rangers left wing Artemi Panarin came to pull Wilson off from Buchnevich, but Wilson then proceeded to attack Panarin. Wilson attacked Panarin and pulled his hair before slamming his head down onto the ice. Wilson then punched him before slamming Panarin back onto the ice when the left winger attempted to get up.

Tom Wilson gets two roughing minors, plus a 10 minute misconduct. Artemiy Panarin is called for roughing, as is Pavel Buchnevich. pic.twitter.com/ExNO73eFhA

Many fans, players and teams were upset at the league’s punishment for the right-winger. “Washington’s Tom Wilson has been fined $5,000, the maximum allowable under the CBA, for Roughing NY Rangers’ Pavel Buchnevich,” the NHL’s Department of Player Safety announced.

Washington’s Tom Wilson has been fined $5,000, the maximum allowable under the CBA, for Roughing NY Rangers’ Pavel Buchnevich.

Former NHL player John Scott released his own response to the league’s decision. “Shame on you, NHL, you should have [done] something to protect Panarin, and shame on Wilson, you ought to know better,” Scott said. “It was a joke of a fine. Listen, I love this kind of hockey, I think we all do, but what Tom did, there’s no excuse for that. It’s insane to me that he only got a $5,000 fine.”

The former player went on to describe it as a bad precedent that the league is setting by only fining Wilson. “What this means: It’s fair game, baby, in any scrum,” Scott said. “If you go into a scrum anywhere on the ice and you see a star player, I’m throwing sucker punches, I’m grabbing this guy, I’m twisting ankles, I’m doing whatever I can because the worst thing that’s going to happen to me is a $5,000 [fine] because I don’t see anyone doing more than what Tom Wilson did to Panarin.”

My thoughts on the Tom Wilson situation pic.twitter.com/GUbNfgV963

The Rangers released their official team statement in response to Wilson’s fine. “The New York Rangers are extremely disappointed that Capitals forward Tom Wilson was not suspended for his horrifying act of violence,” the team’s statement read. “Wilson is a repeat offender, and we find it shocking that the NHL and their department of player safety failed to take appropriate action and suspend him indefinitely. Wilson’s dangerous and reckless actions caused an injury to Artemi Panarin that will prevent him from playing again this season. We view this as a dereliction of duty by NHL Head of Player Safety, George Parros, and believe he is unfit to continue his current role.”

Following the hit, Panarin did not return to the game. The team then announced that Panarin will not play for the remainder of the season because of a “lower-body” injury.