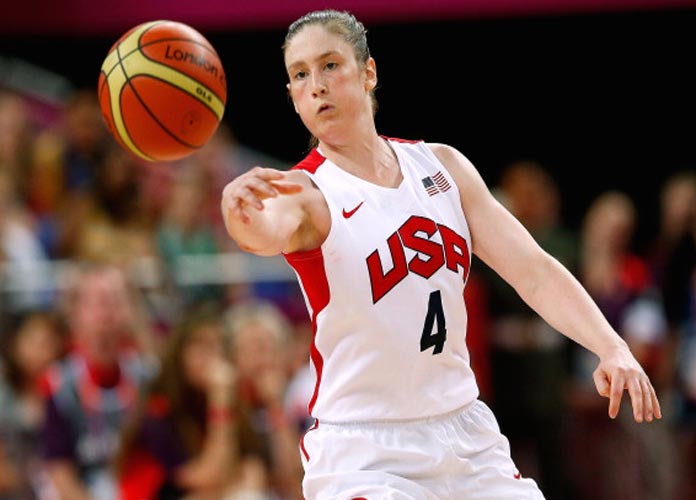 LONDON, ENGLAND - AUGUST 11: Lindsay Whalen #4 of United States passesthe ball in the third quarter while taking on France during the Women's Basketball Gold Medal game on Day 15 of the London 2012 Olympic Games at North Greenwich Arena on August 11, 2012 in London, England. (Photo by Jamie Squire/Getty Images)

Lindsay Whalen, a guard for both the Minnesota Lynx of the WNBA and the United States Women’s National Basketball Team who will be competing in this summer’s Olympic Games in Rio, Brazil, explained what a typical day of training looks like for her at the 100-Day Countdown celebration in New York’s Time Square on April 27.

Lindsay Whalen On Her Training Routine

“Usually, say practice is at 10 o’clock, I’ll usually get to the gym around 8:15 or 8:30,” Whalen told uSports exclusively. “I’ll do some treatment therapy, get ready for practice and start my warmup.”

She then continued. “I’ll get on the elliptical, kind of get my body loose, do a little foam-rolling and stretching, then I’ll do a guard workout with my guard coach, a little skill session that includes dribbling, passing, whatever we have to work on that day.”

As for the what she normally does after the actual practice, Whalen then said she simply likes to cool off and relax like any other young athlete: “We’ll start practice, which will go for about 2 or 2 1/2 hours, then I’ll hit the cold tub after that, let the muscles relax, have some lunch around 1:30/2 o’clock, and then go home and rest up for the next day.”

Whalen, 34, was a four-time All-Minnesota Conference pick at Hutchinson High School in Hutchinson, Minnesota, and helped lead her team there to three consecutive conference championships. She was also a four-time honorable mention All-State selection.

After being drafted by the Connecticut Sun as the fourth overall pick in the 2004 WNBA draft, Whalen played five seasons with the Sun before joining the Minnesota Lynx in 2010. She led the Lynx to its first WNBA Championship the following year. The Lynx finished the regular season 27–7, good for the second best record in franchise history and best in the league, and Whalen led the league in assists with 5.9 per game.

Whalen won her first Olympic gold medal in the 2012 London games, as well as two World Cup titles with the women’s national team in 2010 (Czech Republic) and 2014 (Turkey). She is also a five-time WNBA All-Star and three-time WNBA Champion, her last two wins coming in 2013 and 2015. She also plays for AGÜ Spor of Eurobasket.

Now, as she heads to her second Olympic Games, it appears safe to say Whalen is more than prepared.