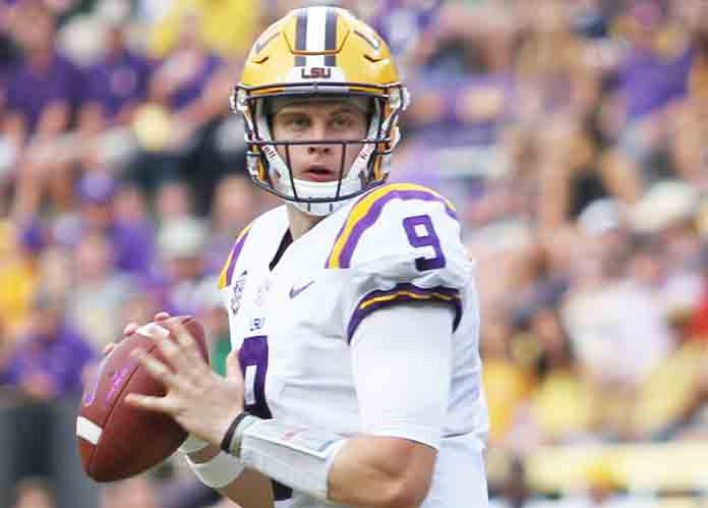 Kyler Murray revealed this week who he believes could be the next Heisman Trophy winner: LSU Tigers quarterback Joe Burrow.

The Arizona Cardinals QB and No. 1 overall NFL draft pick this year — who won the Heisman in 2018 after a standout record at Oklahoma — suggested his successor with the Sooners, Jalen Hurts, could have potentially won this year’s trophy but lost his shot after his team suffered a major loss to Kansas State last month. Hurts transferred to Oklahoma from Alabama.

“Our guy kind of took a hit with that loss,” Murray said of Hurts, according to ESPN. “I think right now, if somebody had to win, it’d probably be Joe Burrow.”

Burrow is second in the country in passing yards with 2,805. He boasts a 78.8% pass completion rating and averages 10.8 yards per pass. He has tossed 30 touchdown passes and recorded four interceptions, and has logged 15 sacks.

The LSU QB also set a major program record for TD passes in a single season this year:

A bit of history for @LSUFootball.

The Tigers lead the AP’s Top 25 college football rankings and are second on the first College Football Playoff list. On Saturday, Burrow and LSU will face Alabama, the No. 2 team in the AP rankings and the third squad on the CFP list.

Hurts has logged 21 touchdowns and three interceptions this year, and has recorded 2.469 yards.

Other college football pundits have argued that Alabama QB Tua Tagovailoa could be Heisman Trophy winner this year. The junior QB was a finalist for the trophy last year after leading the Crimson Tide to a national championship victory over Georgia in overtime.

Tagovailoa has logged 2,166 yards and 27 TDs to go with two interceptions this season for a 74.7% pass completion rating. On Oct. 19, he sustained an ankle injury against Tennessee and received surgery. The QB has since sat out. However, Alabama coach Nick Saban told ESPN Wednesday that Tagovailoa could be ready to play against LSU on Saturday.