Jameis Winston Gets Emotional About Playing With Drew Brees - uSports.org 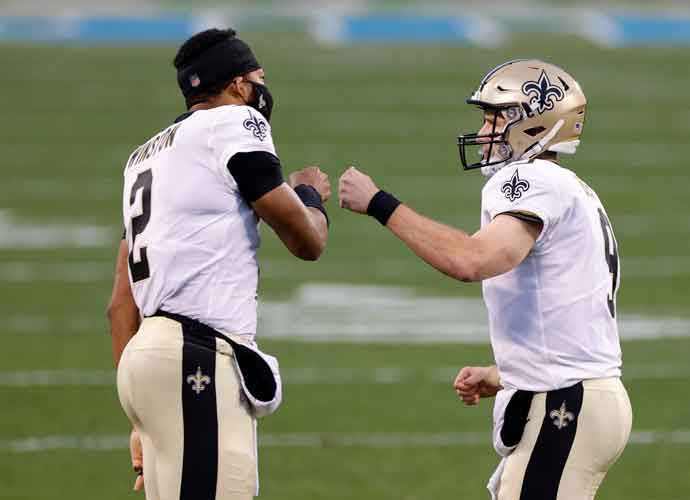 CHARLOTTE, NORTH CAROLINA - JANUARY 03: Quarterback Drew Brees #9 of the New Orleans Saints celebrates with teammate quarterback Jameis Winston #2 following a touchdown pass during the first quarter of their game against the Carolina Panthers at Bank of America Stadium on January 03, 2021 in Charlotte, North Carolina. (Photo by Jared C. Tilton/Getty Images)

Jameis Winston Gets Emotional About Playing With Drew Brees

On Tuesday, an emotional Jameis Winston held back tears when talking about playing with Drew Brees last season. Winston wants to become the New Orleans Saints‘ new starting quarterback, so he would, “love to carry that torch from him.”

In a web conference call, the quarterback reflected on playing with Brees. “Being able to have an entire season with Drew Brees was a dream of mine,” said Winston. Winston was emotional when talking about Brees because he admired the Pro Bowler. Winston had nothing but praise and adoration for the former Saints quarterback.

“For him to put his arm around me or just give me any encouraging words after I saw the resilience, the passion, the way that he approached every single day; for that to even be a story, I was touched by that,” Winston remarked. “Because he doesn’t even know how much he means to me and my family.”

“He doesn’t even know how much he means to me and my family,”

Winston’s emotional response on the last moments he shared with Brees on the field and the impact he had on him ⚜️#ThankYouDrew pic.twitter.com/xi4Rwz2f2f

Winston played for the Tampa Bay Buccaneers but was not re-signed when the team instead decided to pursue Tom Brady. So, the 27-year-old quarterback joined the Saints last season on a one-year deal. Winston joined the Saints with the intention of reviving his career and learning from Brees and the coaching staff.

While the 27-year-old did not play much last season, he was offered another contract by the team to stay for another year. This contract was offered because Brees retired after the season ended and the team needs a new starting quarterback. Winston is expected to compete with Taysom Hill for the starting position.

Winston has the motivation and drive to become the new starting quarterback. “I would love to carry that torch from him, I would love to be able to provide the excitement and joy and resilience that [Brees] provided for this city,” Winston stated.

The quarterback looks to improve and lessen his turnovers by taking the advice of his idol to heart. “One of the greatest things I learned from Drew was, you know, ‘Jameis, we are making decisions based on it being the right decision. We’re not concerned about the result, right? Because over time the right decision is going to get us to where we want to be.'”

Winston was sparingly used last year, but did throw a 56-yard touchdown pass on a trick play in the Saints’ playoff loss to the Buccaneers. That being said, when Brees missed time last year with an injury, it was Hill who started in his place. It will be interesting to see whether Winston can beat Hill out for the starting gig in 2021.