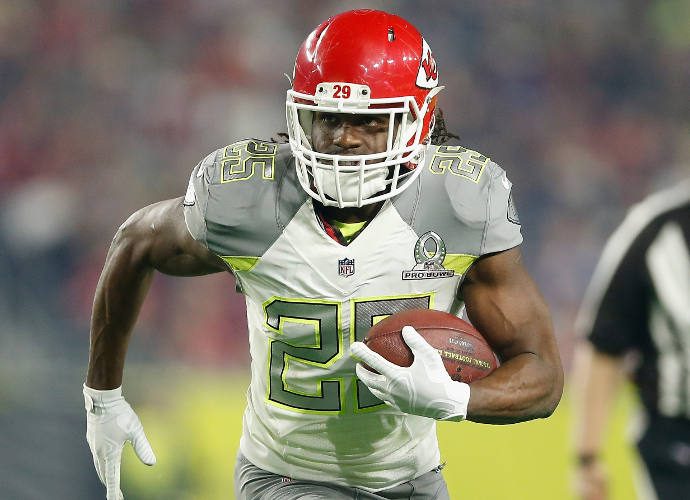 during the 2015 Pro Bowl at University of Phoenix Stadium on January 25, 2015 in Glendale, Arizona.

Jamal Charles, Chiefs Running Back, Compares Himself To Lebron James

Many people tend to criticize Lebron James, but very few people ever compare themselves to him – regardless of the sport. During a training camp practice yesterday, Kansas City Chiefs running back Jamal Charles likened himself to the King. He said that on the field, “As long as I play in this league and play on a high level, I always feel like a team is going to have to stop me. Sometimes I feel like the LeBron of football, because I can do so much.”

Everyone likes confidence, but what exactly does he produce? Charles is a consistent player, who in his 8th season in the National Football League, has rushed for a career 1249 yards totaling 6856 gained yards with his longest run equaling 91 yards. This adds up to about 1000 yards in the last season, but unlike James, who has been playoff and finals victories, Charles, and by extension, the Chiefs, haven’t won a playoff game since 1994.

However, contrasting the two sports, Charles has provided a lot to his team from his position. Responsible for 27.8 percent of his team’s yardage and rushing for 1033 yards last season, he has been on the mend after in ACL tear in 2011. This is compared to James’ 40.9 percent production, both in score and assists, for his team. Again, though, points and influence are much easier to do in basketball than in football due to the higher scores, so who knows, he might be the King of the field? He just has to beat out the likes of Marshawn Lynch, La’Veon Bell, Eddie Lacy, and Jamal Charles, but you know, whatever floats his boat.