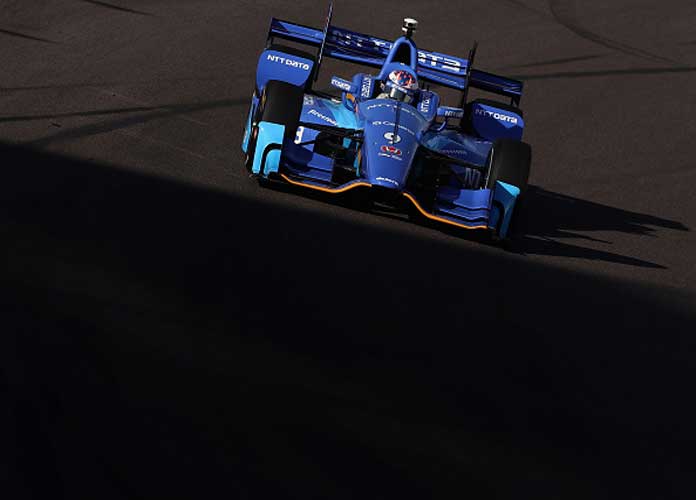 Indianapolis 500 pole-sitter Scott Dixon and former racer Dario Franchitti were unharmed after being robbed at gunpoint at a Taco Bell in Indianapolis on Sunday night just hours after the race finished.

Dixon’s wife Emma Davies-Dixon was also with the drivers. According to a police report, the trio were robbed at approximately 9:40 pm local time in the drive-thru lane of the fast-food restaurant located less than a mile from Indianapolis Motor Speedway, where Dixon had set the fastest qualifying time in 21 years hours prior in the Indy 500. Police did not immediately reveal what was stolen from the two drivers or Dixon’s wife.

Two men ages 14 and 15 were arrested moments later, per police. Both were charged with robbery, and the older of the two was also charged with resisting law enforcement.

According to IndyCar racer Tony Kanaan, Dixon was making a late-night food run for a group of drivers that included himself.

“While they were ordering with their windows down two guys approached at gun point they held a gun at Dixon’s head and asked him for his wallet and his phone,” Kanaan told the Indianapolis Star. “You don’t expect that to happen, especially here.”

Detectives stated in the report that surveillance cameras showed a suspicious vehicle in the parking lot prior to the robbery. Around 30 minutes later, the report added, officers stopped the car and the passenger fled, but was eventually apprehended by a police dog. One suspect was transported to Marion County Holding at Eskenazi Hospital, while the other entered the local juvenile detention center.

Police also said the three victims managed to identify one of the suspects.

The Marion County Prosecutor’s Office will review the case and make a changing decision. Though Dixon, 36, and Franchitti refused to speak to reporters Monday, their team Chip Ganassi Racing issued a statement saying the drivers are “completely fine.”

“Thank you to everyone for all of your concerns about their well-being,” the statement read. “However, we will allow the Speedway/Indianapolis police departments to handle the situation and while they conduct their investigation we will refrain from making any further comments to allow Scott to focus on the upcoming Indianapolis 500.”

There goes that Taco Bell sponsorship we were working on I guess. @scottdixon9 @dariofranchitti @EmmaDaviesDixon

“We’re all very relieved to hear that everyone is safe and that the suspects were caught,” Taco Bell Corp. spokesman Rob Poetsch said in an email to The Associated Press.

Dixon, a four-time series champion, won the Indianapolis 500 from the pole in 2008. After turning four laps at an average speed of 232.164 mph during Pole Day qualifying, the Australian-born New Zealander is expected to lead the field when he starts on the pole for the third time at Indianapolis Motor Speedway on Sunday.

Franchitti, a three-time Indy 500 winner and four-time IndyCar Series champion, retired after a giant crash at the 2013 IndyCar race in Houston. The 44-year-old Scotsman sustained a broken back and right ankle, as well as a concussion in the collision. Franchitti and Brazil’s Helio Castroneves are the only foreign-born drivers to win the Indy 500 three times.

Dixon is fourth on the series’ career list for wins (40), is tied for second in most series championships (four) and is now one of five drivers to win the Indy pole three times.