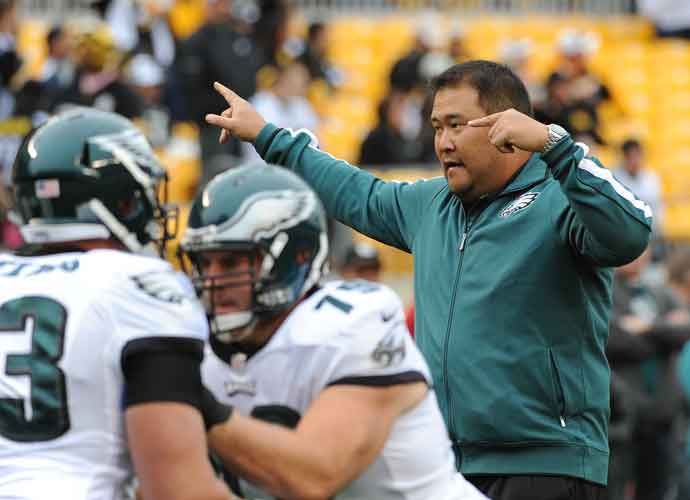 PITTSBURGH, PA - OCTOBER 7: Offensive line assistant Eugene Chung of the Philadelphia Eagles directs players during pregame warmup prior to a game against the Pittsburgh Steelers at Heinz Field on October 7, 2012 in Pittsburgh, Pennsylvania. The Steelers defeated the Eagles 16-14. (Photo by George Gojkovich/Getty Images)

On Sunday, a horrible breaking news story broke in the ranks of the NFL that showed we have a long way to go in the way of ending systemic racism. Former NFL offensive lineman and assistant coach Eugene Chung said that he was told during an interview that he’s “not the right minority.”

Chung is Korean American, and these comments come at a time in which hate crimes against Asian Americans are at an all-time high. The positive thing for Chung is that his contention has not gone unnoticed. There has been an outpouring of support for him on social media and The Fritz Pollard Alliance, through executive director Rod Graves, has issued a statement regarding Chung’s claim.

“Alleged comments made to Eugene Chung by an NFL team during a recent interview should be investigated by the NFL,” Graves said. “If the comments regarding his status as a Korean American are true, it is further evidence that despite good faith changes to diversity-related policies, the NFL’s actual hiring practices are still riddled with discrimination.”

The NFL has issued no statement regarding Chung’s remark. The statement from the Fritz Pollard Alliance may force the league to chime in and, possibly, to take action.

Chung didn’t name the team when speaking to the Boston Globe. If he’s willing to share the name of the team with the league office, the situation can properly be handled. That’s the primary issue though, Chung probably can’t afford to say anymore. He might be reluctant to say anything, given that it could make it even harder to land a job with another team. That would be incredibly wrong, but it’s a very real concern for coaches who consider taking a stand. Whoever “spills the tea” needs to be prepared for the possibility that he’s sacrificing his or her career. It’s a terrible casualty in the war against discrimination and bigotry in pro sports. It’s a similar stand to the one Michael Sam took, just by coming out a few years ago. His career was sacrificed.