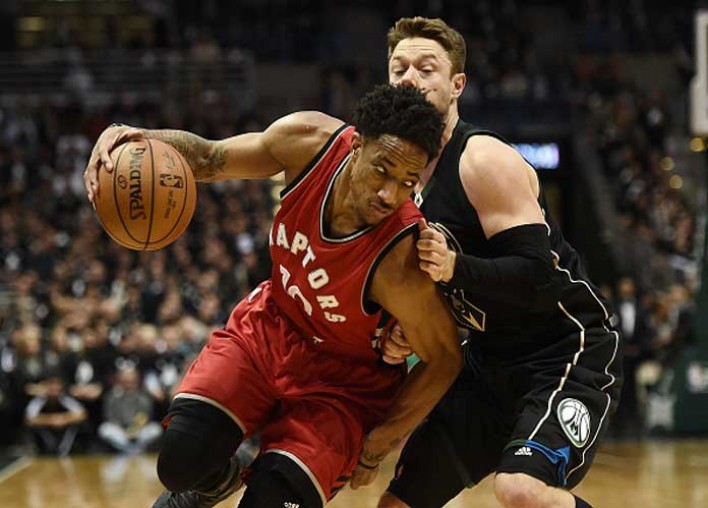 MILWAUKEE, WI - APRIL 20: DeMar DeRozan #10 of the Toronto Raptors works against Matthew Dellavedova #8 of the Milwaukee Bucks during the second half of Game Three of the Eastern Conference Quarterfinals during the 2017 NBA Playoffs at the BMO Harris Bradley Center on April 20, 2017 in Milwaukee, Wisconsin. The Bucks defeated the Raptors 106-77.

The San Antonio Spurs on Tuesday night agreed to trade Kawhi Leonard and Danny Green to the Toronto Raptors in exchange for DeMar DeRozan and Jakob Poeltl.

As part of the deal, the Spurs also receive a 2019 protected first-round pick.

ESPN hosts and commentators had much to say about the trade. Richard Jefferson noted how this swap may be difficult for both Leonard — who has played all seven of his NBA seasons with the Spurs — and DeRozan, a four-time All-Star who has also played his entire professional career (nine seasons) with the Raptors.

“The first breakup is always the hardest, [especially] when you don’t see it coming,” said Jefferson, drawing from his own experiences in the NBA and after praising Toronto as a great basketball city. “DeMar, I know you’re probably upset right now and I don’t want to talk about this like it’s done but you’re going to a great organization. You’re going to a great place, where people have thrived” Jefferson added, citing the Spurs’ recent successes including their 2014 NBA championship and their signing of top stars like Tim Duncan.

“First Take’s” Ryan Hollins noted how he believes Leonard has lost trust that everyone around him from the Spurs and thinks they no longer have “loyalty” toward him, a point some of his co-anchors responded to by saying they don’t believe Leonard will be loyal to the Raptors.

According to ESPN’s Chris Haynes, who cited NBA sources, Leonard is not the least bit excited about his next destination, to say the least. The 27-year-old small forward suffered several injuries last season and has reportedly been itching to leave San Antonio for quite some time after growing heavily upset with his situation.

Kawhi Leonard has no desire to play in Toronto, league source tells ESPN.

The Philadelphia 76ers had been rumored to potentially land Leonard, although the two-time All-Star and 2014 NBA Finals MVP had been hoping to return to his hometown of Los Angeles to play for the Clippers or the Lakers, according to CBS Sports.

If he truly is unhappy about ending up with the Raptors, Leonard could thus potentially opt out of his new deal and become a free agent in 2019. Toronto fired 2017-18 NBA Coach of the Year Dwane Casey earlier this year despite finishing the season 59-23 and first in the Eastern Conference.

Shortly after the trade was announced, DeRozan posted a series of brief messages on his Instagram story that did not seem particularly positive. Perhaps Jefferson was right and DeRozan isn’t happy about his new team either:

DeMar DeRozan posted these to his Instagram story… pic.twitter.com/JDc0stS5jx

ESPN’s Michelle Beadle, a known big Spurs fan and co-host of “Get Up!”, said she was happy with the new trade, adding she “loves” DeRozan.