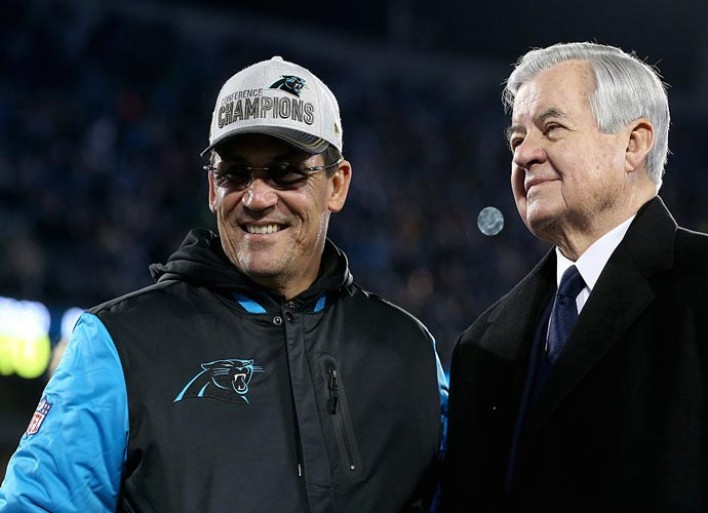 Caption:CHARLOTTE, NC - JANUARY 24: (L-R) Head coach Ron Rivera and owner Jerry Richardson of the Carolina Panthers smile after defeating the Arizona Cardinals with a score of 49 to 15 in the NFC Championship Game at Bank of America Stadium on January 24, 2016 in Charlotte, North Carolina. (Photo by Streeter Lecka/Getty Images)

Former SEC Chairman and U.S. Attorney Mary Jo White led the probe, which concluded that “no information” was discovered that could either “discredit the claims made or that would undermine the veracity of the employees who made those claims.”

In a statement, the NFL said the majority of the money from the fine “will be used to support the work of organizations dedicated to addressing race and gender-based issues in and outside of the workplace.”

Among the organizations that the NFL will reportedly financially support are Beauty for Ashes Ministry, Inc. — a Charlotte-based religious entity that provides assistance to victims of sexual assault and domestic violence — and Black Women’s Blueprint, a Brooklyn, New York-based organization dedicated to helping black women deal with discrimination and other issues. Also receiving aid from the league will be Women of Color Network, Inc., a national grassroots non-profit based in Harrisburg, Pennsylvania that strives to deliver training and other forms of support to minority women and to advocate for stopping violence against women.

Richardson, 81, announced late last year that he would step down as the Panthers’ owner following revelations that he mistreated members of the organization. The allegations against the owner ranged from cases of sexual harassment of women to insulting a team scout with a racial epithet. The franchise was then revealed to be up for sale, 24 years after Richardson purchased it for roughly $206 million.

David Tepper, a hedge fund billionaire, was unanimously approved by NFL team owners last month to buy the Panthers for a league-record $2.275 billion. According to the league, the sale is projected to be finalized within about two weeks.

In April, Sports Illustrated published a letter a woman wrote to Richardson in which she described her fear and general reactions to the owner’s unwanted sexual advances toward her.

According to NFL.com, the Panthers have recently introduced several rules and training to fight sexual harassment and other types of workplace misconduct.