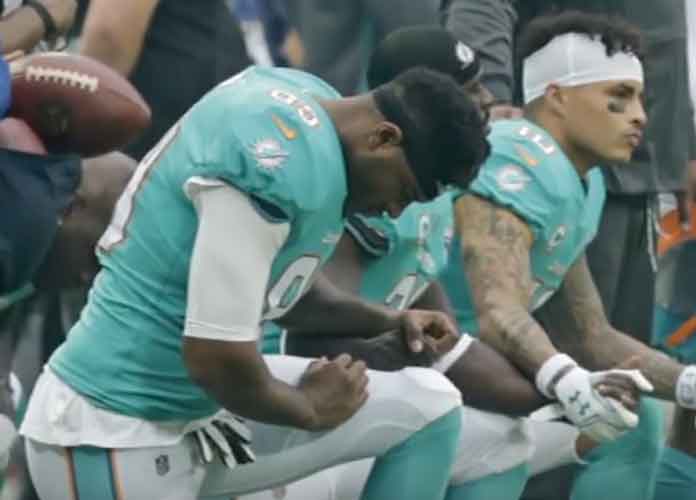 President Donald Trump yet again voiced his displeasure with national anthem protests on Tuesday night, although this time he took aim at ESPN.

During a rally in West Virginia, Trump blasted the network for its recent announcement that it would not air The Star-Spangled Banner during Monday Night Football games.

The crowd of Trump supporters quickly started booing and the president then added: “So while the players are kneeling, some of them, not all of them at all, you’re all proudly standing for our national anthem.”

ESPN President Jimmy Pitaro told reporters on Friday that the network does not typically air the national anthem, and that he does not expect that to change this upcoming NFL season.

“Again that could change. It’s unpredictable what could happen in the world but as of now, we’re not. We have communicated that back to the NFL,” Pitaro said, according to the Los Angeles Times. “They have not asked but as [a] courtesy and good partners we have let them know what our plans are.”

In 2017, ESPN only broadcast the anthem in three instances for Monday Night Football games: on the anniversary of the 9/11 terror attacks, the day after the mass shooting at a music festival in Las Vegas in October, and the first Monday after Trump started slamming NFL players like Colin Kaepernick who kneeled to protest the anthem.

Kaepernick and other NFL players started protesting the anthem in order to voice opposition to racial injustice and police brutality against minorities in the United States. One other politician who recently commented on the protests was Texas Democratic Rep. Beto O’Rourke, who is facing off against GOP Sen. Ted Cruz in this year’s midterm elections.

After being asked what his stance on the anthem protests was, O’Rourke said he did not believe NFL players’ actions were disrespectful, and went on to cite dozens of historical examples of Americans using peaceful methods to protest injustice of all types. O’Rourke mentioned the civil rights movement and its many prominent leaders like Martin Luther King and Rosa Parks.

“[These are] peaceful, non-violent protests, including taking a knee at a football game to point out that unarmed black men, teenagers and children are being killed at a frightening level right now, including by members of law enforcement — without accountability and without justice.”

In May, the NFL announced that players could be penalized with fines and other punishments for kneeling for the anthem. However, the league and its union — the NFL Players Association — more recently said they had reached a standstill on the issue and that the new policy would be reviewed over the next several weeks.