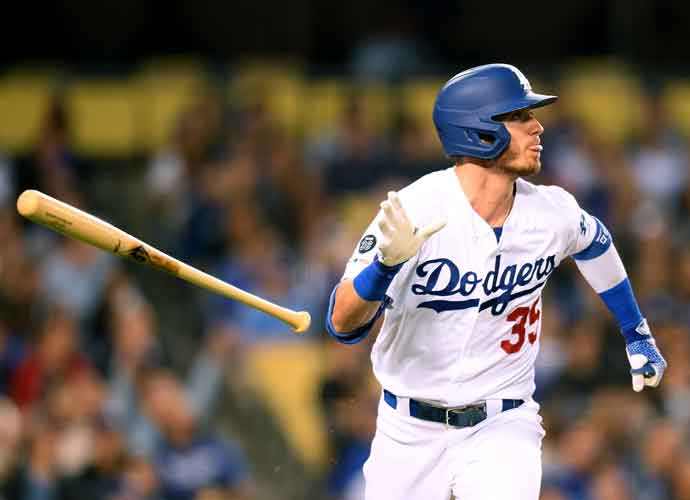 While the move will allow him to become a free agent, the team could still re-sign him.

The former NL MVP winner’s estimated salary would have been in the $18 million range.

The Dodgers plan to non-tender outfielder Cody Bellinger, making him a free agent, source tells @TheAthletic. Team could still re-sign him for less than his projected arbitration salary in the $18M range.

The decision to not tender Bellinger could be for a couple of reasons.

The Dodgers don’t feel that he is worth around $18 million and/or it has its eye sights set on bigger moves.

For example, the Dodgers are now reportedly expected to at least make a play for Aaron Judge.

In addition to letting Bellinger go, the Dodgers are no longer responsible for the contracts of David Price, Kraig Kimbrel, Tyler  Anderson, Andrew Heaney, as well as Trea and Justin Turner.

That frees up $100 million, according to MLB insider Jon Heyman.

Word going around now is Dodgers will make a run at Aaron Judge. Logical with $100M now off the books with Bellinger, Kimbrel, Anderson, Heaney, Price and 2 Turners off the roster. Needs include SS, 3B, SPs, RP and now OF.

Judge will likely get a multi-year deal worth more than $300 million after setting a new AL record with 62 home runs in 2022.

Often in free agency, the Dodgers are willing to spend and make big moves.

Last year, the Dodgers signed one of the top free agents, Freddie Freeman, to a six-year $162 million contract.

The move by the Dodgers with Bellinger allows them to keep its options open in free agency.

As things stand, the Dodgers have a total of $130.5 million committed to its roster in 2023, according to Spotrac.

The luxury tax threshold is $233 million.

Some other top free agents this year in addition to Trea Turner and Judge include Jacob deGrom, Justin Verlander and Carlos Correa.

Expect the Dodgers to look at making a big play at one of the top free agents given what it’s done in recent history.

But this could very well be the end for Bellinger in a Dodgers uniform.

In 2019, Bellinger took home the triple crown for the Dodgers – winning the Silver Slugger, Gold Glove and NL MVP awards.

He has also been a two-time All-Star, won NL Rookie of the Year in 2017 and helped the ball club win the world series in 2020.

But he hasn’t been the same player since then.