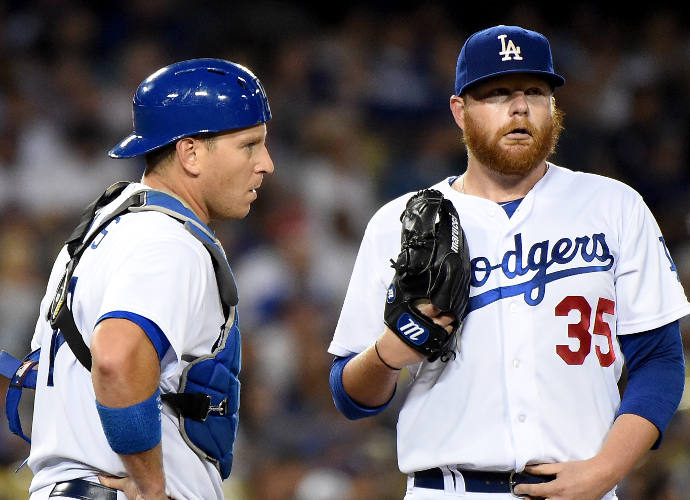 at Dodger Stadium on August 10, 2015 in Los Angeles, California.

After getting swept by the Pittsburgh Pirates, the Dodgers are looking at a potential playoff move if they can come out successful in a three game series against the Washington Nationals.

Thoughts on the Dodgers from this weekend … https://t.co/8j6g7w9glM

When they went up against each other after the all-star break, the Dodgers came away with the win with two of three, but they didn’t face National’s ace, Gio Gonzalez.

Gonzalez, the lefty pitcher, is currently 804 with a 3.75 ERA (3.09 FIP)this year, but it is the worst ERA, WHIP and hits since 2009. While this is the case, he still excels at forcing hits within the park and on the ground. His ground ball rate is evident, as he is fourth in the majors behind, Tyson Ross, Dallas Keuchel and Brett Anderson, all of whom are stellar pitchers. Against the Dodgers, Gonzalez is 1-1 with a 2.50 ERA in 18 innings, something that the Dodgers will need to have an answer for if they want to beat the Nationals. Of the starts Gonzalez has against the Dodgers, two of them were at the Dodger’s home park where he has only allowed one home run with a 3.75 ERA.

But then again, they are coming off a 13-6 loss against the Pirates. 13! That number is fairly unusual in the MLB, and it calls to mind the mercy rule in Wii baseball.

In any case the Dodgers are placing Brett Anderson on the starting lineup, only his 22 start of the season. He’s only started a handful of times, but when he has, he has impacted the game towards the Dodgers, and they are hoping that he will be the answer to the National’s Gio Gonzalez.