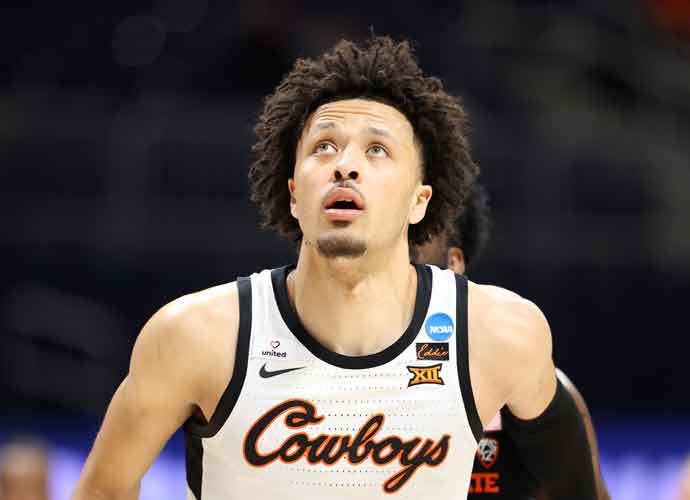 INDIANAPOLIS, INDIANA - MARCH 21: Cade Cunningham #2 of the Oklahoma State Cowboys watches a shot as they take on the Oregon State Beavers during the first half in the second round game of the 2021 NCAA Men's Basketball Tournament at Hinkle Fieldhouse on March 21, 2021 in Indianapolis, Indiana. (Photo by Andy Lyons/Getty Images)

The Detroit Pistons earned the first pick of the 2021 NBA Draft, and Ben Wallace was there to represent the franchise. Wallace was recently announced as an inductee to the Naismith Basketball Hall of Fame and is a Pistons legend that helped the team win the 2004 NBA Finals.

WE’RE OFFICIALLY ON THE CLOCK! For the THIRD time in franchise history, the #Pistons will have the No. 1 pick in the NBA Draft!!!!! pic.twitter.com/LbhKNEqLlt

The first pick will ensure the Pistons will add another top-level talent to their young team. Just last year, the Pistons took three players in the first round of the draft. It will also be the Pistons’ first top-five selection since 2003 when they took Darko Milicic second overall. It will be Detroit’s first top overall pick since they drafted Hall of Fame center Bob Lanier in 1970.

“Obviously we get to add another wing player to the restoration process,” Detroit’s general manager Troy Weaver said. “We’re excited to be in this position. But it means that we’ve got a lot of work to do, and we’re going to be diligent about it. But it always helps to be able to add the No. 1 pick.”

Oklahoma State guard Cade Cunningham is expected by many to be the first pick of the draft.

The top three picks of the draft are the Pistons, Houston Rockets and Cleveland Cavaliers. The Rockets have entered a rebuilding process after trading away star James Harden to the Nets.

Cleveland has picked fifth each of the past two seasons, but this time they got lucky with the third pick. The Cavaliers are looking to make the playoffs next season with their young core of guards Collin Sexton and Darius Garland, forward Isaac Okoro and center Jarrett Allen.

The rest of the order is as follows:

Both the Warriors and Magic have two picks in the lottery.