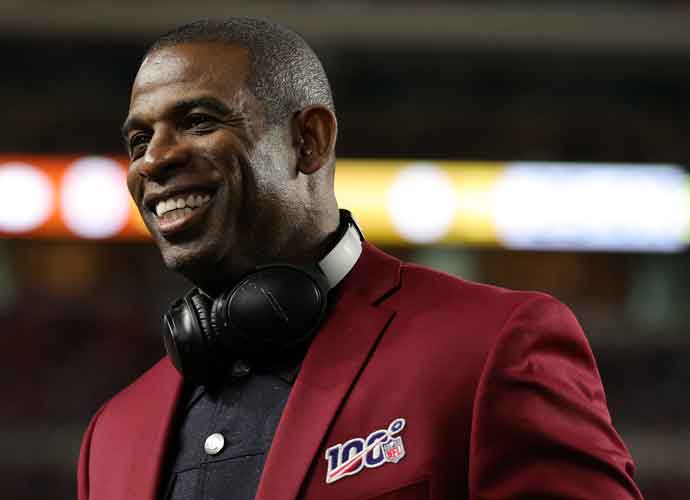 MIAMI, FLORIDA - FEBRUARY 02: Deion Sanders of the NLF 100 All-Time Team is honored on the field prior to Super Bowl LIV between the San Francisco 49ers and the Kansas City Chiefs at Hard Rock Stadium on February 02, 2020 in Miami, Florida. (Photo by Maddie Meyer/Getty Images)

Deion Sanders earned his first win as a collegiate coach but it was dampened by his belongings being stolen during the game.

Sanders made his debut coaching by leading Jackson State to a 53-0 victory over Edward Waters on Sunday. During the post-game conference, Sanders revealed that the locker room was broken into and his items were stolen from his office. The NFL hall of farmer told reporters, “while the game was going on, somebody came in and stole every darn thing I had in the locker room, coaches’ office, credit cards, wallet, watches.” The former NFL player called the robbery “malicious” and “targeted.”

Thirty minutes after the post-game interview, the stolen items were found and returned. A spokesperson for Jackson State stated that the items were simply misplaced, and no police report would be filed.

Sanders took to Twitter to disagree, saying, “Naw, it was stolen, but they got it back. It was stolen out of my personal bag in my office, and my assistant caught the gentleman in the process of stealing it, but she was alone.”

Naw it was stolen but they got it back. It was stolen out my personal bag in my office and My assistant caught the gentleman in the process of stealing it but she was alone. No Miscommunication my man at all https://t.co/foXTKwqsQC

Ashley Robinson, JSU Vice President and Director of Athletics, released a statement regarding the incident. “Immediately following our win today, several items belonging to Coach Prime were taken from the locker room,” she said. “Those items were quickly recovered and returned. While we consider this an isolated incident, we are thoroughly reviewing security protocols to ensure this does not happen again.”