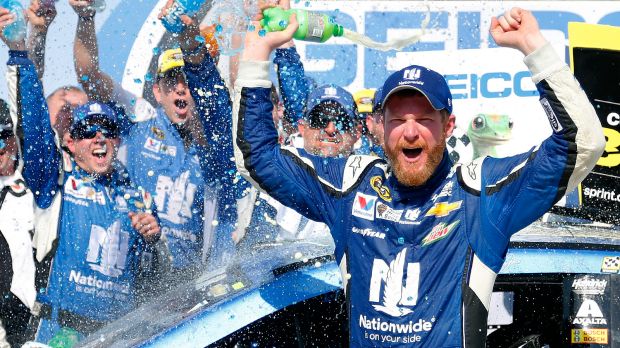 NASCAR’s most popular driver, Dale Earnhardt Jr., dominated Talladega Superspeedway early on in his career, just like his father did. And although Junior’s still one of the best at restrictor plate tracks, he hadn’t won at Talladega since 2004. That changed on Sunday, as Dale Earnhardt, Jr. led the pack through the final green flag run without much of a charge behind him to win the GEICO 500.

Earnhardt, Jr. led 67 of the 188 laps of the race, with his Hendrick Motorsports teammates Jimmie Johnson and Jeff Gordon also leading a big bulk of the race. With Johnson behind him in 2nd, Earnhardt, Jr. had no worries about a late charge as anyone trying to form a draft to pass him would be blocked by his teammate.

That is, of course, if there was much of a late charge, as the pack stayed single file all the way until the final lap, when any attempts to make moves were met with futile. Tony Stewart attempted to go to the bottom of the track while the leaders ran up top, but found no help and fell back in the field to a 19th place finish. Rookie Ryan Blaney was criticized by some for not trying to make a move on the leaders earlier, but still impressed everyone with a 4th place finish in his first race at Talladega.

With the win, Dale Earnhardt, Jr. all but clinches a spot in NASCAR’s Chase for the Sprint Cup playoff in September. He joins points leader Kevin Harvick, teammate Jimmie Johnson, Joey Logano, Brad Keselowski, Matt Kenseth, Denny Hamlin, and Kurt Busch as race winners on the season. That means as long as there aren’t more than sixteen race winners, half of the Chase’s sixteen spots are already accounted for.

But for now, it was a celebration for Dale Earnhardt, Jr. and his legion of fans at Talladega– a sight that is well accustomed yet so long in returning.