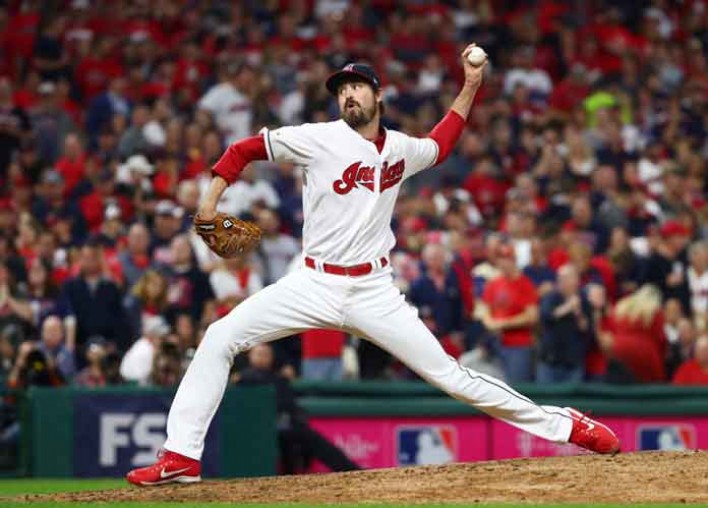 CLEVELAND, OH - OCTOBER 05: Andrew Miller #24 of the Cleveland Indians delivers the pitch during the seventh inning against the New York Yankees during game one of the American League Division Series at Progressive Field on October 5, 2017 in Cleveland, Ohio. (Photo by Gregory Shamus/Getty Images)

Cleveland’s baseball team, the Indians, has unveiled a couple of new threads ahead of the upcoming season. They’ll be without the longtime Chief Wahoo logo, a racist caricature of a Native American.

The new uniforms feature the block ‘C’ logo on the front of the cap, with jerseys reading ‘Indians’ and ‘Cleveland’ in various colors. The MLB All-Star Game logo will replace the Chief Wahoo logo, which has appeared on the team’s sleeves since 2014.

The Cleveland @Indians just debuted new uniforms for 2019. What’s missing? The Chief Wahoo logo that’s been the subject of long-standing criticism over its racist imagery pic.twitter.com/N6Ogyf8uiX

MLB commissioner Rob Manfred and Indians owner Paul Dolan announced earlier in 2018 that Chief Wahoo would no longer appear on uniforms or stadium signs following the end of the 2018 season. Manfred said the logo would no longer be “appropriate for on-field use,” although merchandise featuring the logo will still be available for purchase in the stadium and throughout retail stores in Ohio.

They will continue to sell the merchandise purely to retain the trademark they possess, according to CBS.

The Indians are one of several major league sports teams, like the NFL’s Washington Redskins, to long face criticism and controversy because of their offensive name or logo.