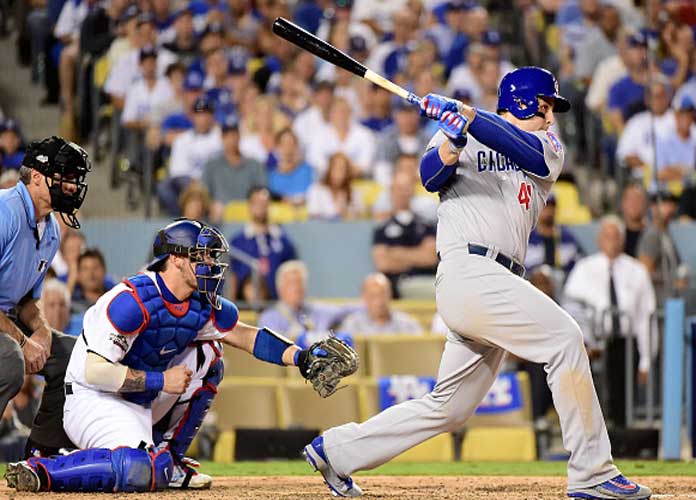 LOS ANGELES, CA - OCTOBER 19: Anthony Rizzo #44 of the Chicago Cubs hits a two-run single in the sixth inning against the Los Angeles Dodgers in game four of the National League Championship Series at Dodger Stadium on October 19, 2016 in Los Angeles, California.

On Monday, Chicago Cubs first baseman Anthony Rizzo allowed ESPN to mic him up during a plate appearance in a spring training game against the Los Angeles Angels. Rizzo while at the plate cracked a joke about the Houston Astros and their sign-stealing scandal.

As the veteran MLB slugger went through the mental work during an at-bat, Rizzo had to guess what pitch was coming next. When Rizzo couldn’t figure out what was coming, he threw out an obvious joke at the expense of the Astros.

“I’m doing some math in my head about where he is going to throw. … Someone bang for me.”

“I have no idea. I wish I knew,” he said. “Someone bang for me.”  The first baseman one pitch later, hit a beautiful ball into the outfield to get him on base.

Rizzo’s joke was drawing attention to the Astros’ misconduct operation that began in 2017. The Astros used an illegal live feed to crack the opposition’s signs. They would then signal to the batter’s box what pitch was coming by either banging on a trash can or not. The story was brought to attention in November after Oakland Athletics pitcher and former Astros’ pitcher Mike Fiers went public with information about the scheme. A league investigation concluded with the Astros being stripped of two draft picks and fined $5 million in January. The Astros also fired general manager Jeff Luhnow and manager A.J. Hinch after both were suspended for the season.

Rizzo was not the only player to knock on the Astros. Kris Bryant, Rizzo’s teammate, and Cubs third baseman, also took a stab at the Astros while mic’d up during his at-bat. He told Angels catcher Jason Castro that he’s mic’d up and the broadcasters were “going to tell me everything.” This is a reference to the fact that the Astros used a camera to relay pitch signs.

Cincinnati Reds pitcher Trevor Bauer decided to give an example of what the Astros were doing.  While facing the Los Angeles Dodgers, Bauer deliberately told them what pitch was coming. Bauer is known for taking shots at the Astros. The pitcher decided to flip his glove to show the catcher and batter what ball he was going to throw instead of hiding the pitch behind his back.

Trevor Bauer was indicating to Dodgers’ batters what pitch he was throwing. pic.twitter.com/WyXULCCe98