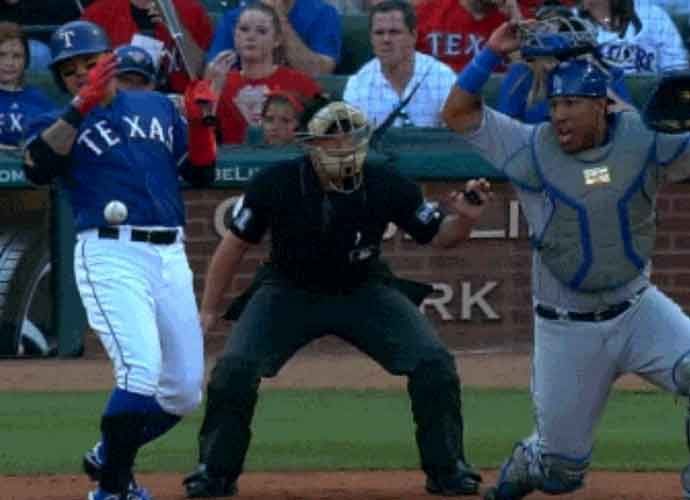 Man, Shin-Soo Choo cannot catch a break. Over the course of his 14-year MLB career, the Texas Rangers outfielder has seemingly been hit by as many pitches as anybody. In fact, he led the league in HBPs in 2013 with 26 when he was with the Cincinnati Reds, a full 8 more times than the AL’s hit by pitch leader, Shane Victorino.

And I’m really not sure why that’s the case. I mean, he’s not a total jerk, so it’s not like pitchers are going out of their way to hit him all the time, and he’s not the biggest threat in the world with the bat, so he doesn’t always warrant being pitched around. No, it just seems like the ball is somehow magnetically attracted to Choo, and that was shown to be the case yet again in Thursday’s game against the Kansas City Royals.

As Royals pitcher Danny Duffy‘s slider to Choo hit the dirt, Rangers outfielder Delino DeShields took off from first in order to snag second on the miscue. But this was no ordinary dirt ball, as it bounced from the dirt onto the heel of Royals catcher Salvador Perez‘s glove. It then went flying from Perez’s hand and right into Shin-Soo Choo’s face, because that’s just the fate the world has chosen for him. Perez then hustles to the ball to chuck it to shortstop Alcides Escobar at second, nailing DeShields out on the slide.

Does all this seem to serendipitous to you to be real? Well, check it out for yourself:

So not only is this guy constantly getting hit by balls coming directly from pitchers’ hands, but it turns out that he also needs to watch out for incoming balls from catchers as well. Talk about not being able to catch a break.