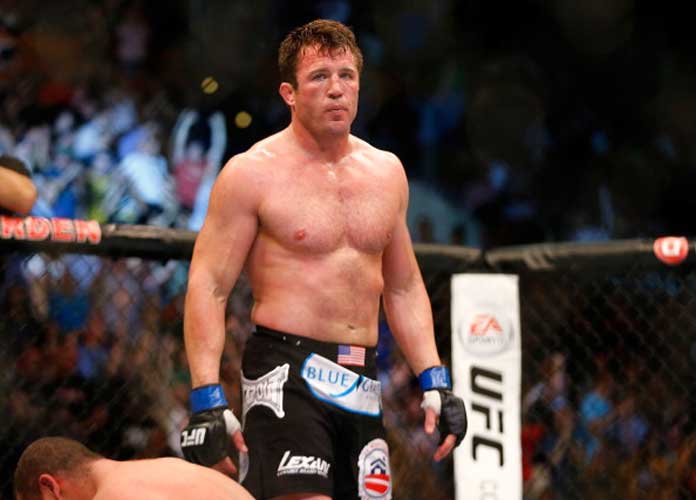 BOSTON, MA - AUGUST 17: Chael Sonnen reacts after winning the fight with a tap out by guillotine choke against Mauricio Rua in their light heavyweight bout at TD Garden on August 17, 2013 in Boston, Massachusetts. (Photo by Jared Wickerham/Getty Images)

Former UFC fighters Chael Sonnen and Tito Ortiz have been exchanging verbal jabs all throughout the publicity trail for their Bellator 170 bout this weekend, but now, Sonnen has made it personal.

“Tito always says I’m using my mouth to get my opportunities,” Sonnen said at the event in Hollywood. “The only person that I know that made money using their mouth is his ex-wife.”

For minutes after that jab, Ortiz glared at Sonnen from across the dais while shaking.

“Just to correct you, there was never no marriage,” Ortiz said. “You’re a f—ing punk, dude. “That’s what you call class, right here (pointing to himself), him, no class. No class at all. That’s why you see him in jeans and a f—ing T-shirt.”

Sonnen just laughed this off.

“That was a nasty line by me,” Sonnen said. “They don’t call you The Bad Guy for nothing.”

First dumb thing I’ve heard Chael say… it’s like stating the sky is blue and expecting that to be a revelation 🙄 https://t.co/ZecRIAlNaH

Jameson later clarified she wasn’t exactly upset about Sonnel’s remark, rather that he simply “stated the obvious. ”

To everyone thinking @ChaelSonnen ‘s remark at the press conference for his fight with Tito bothered me, it didn’t… he stated the obvious

Bellator MMA president Scott Coker, who was sitting in between the two fighters at the press conference, was unable to hide his shock as the crowd gasped at the statement.

Bellator 170 will be held on Saturday night at The Forum in Inglewood, Calif. Ortiz, 41, will retire following this bout after a legendary UFC Hall of Fame career. He said Thursday the trash talk is fueling him rather than getting to him.

“This ain’t a competition,” Ortiz said. “This ain’t a wrestling match. This is a fight. I’m gonna hurt that man.”

The 39-year-old Sonnen, meanwhile, is making his return after more than three years away from the cage. The former middleweight UFC contender was hit with a doping suspension from the Nevada Athletic Commission (NAC) and vowed to retire.

Now, Sonnen says, he is prepared to go on a “legend’s ass-whooping tour.”

The other thing motivating Sonnen is that Ortiz had a long run as the UFC light heavyweight champion at a time when Sonnen felt like he just didn’t have his opportunity.

“I have made a contention since the ’90s that I’m the baddest dude in the world,” Sonnen said. “On Saturday, we’ll find out.”

Ortiz countered by saying “He’s not even a man, he’s a child.”

However, Sonnen got the last laugh– literally– joking while Ortiz was dead serious. Sonnen took a shot at Ortiz for his lack of money.

“This show is free on Spike TV,” Sonnen said. “That means everyone can afford it — except for Tito. Because he’s broke. Get it?”

BOSTON, MA – AUGUST 17: Chael Sonnen reacts after winning the fight with a tap out by guillotine choke against Mauricio Rua in their light heavyweight bout at TD Garden on August 17, 2013 in Boston, Massachusetts. (Photo by Jared Wickerham/Getty Images)