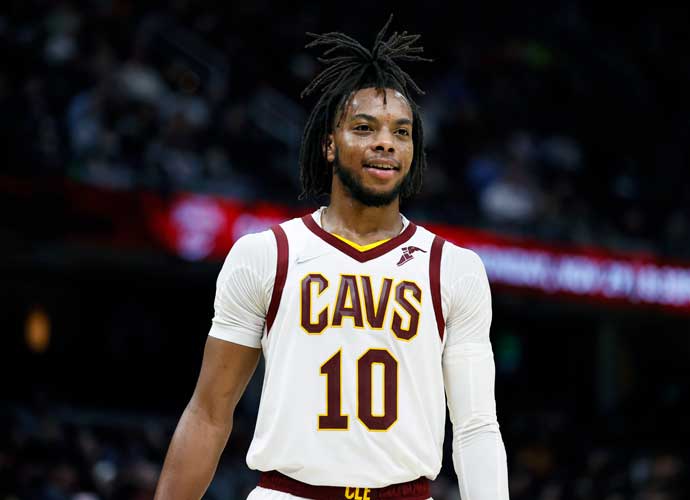 CLEVELAND, OH - NOVEMBER 27: Darius Garland #10 of the Cleveland Cavaliers plays against the Orlando Magic during the second half at Rocket Mortgage Fieldhouse on November 27, 2021 in Cleveland, Ohio. The Cavaliers defeated the Magic 105-92. NOTE TO USER: User expressly acknowledges and agrees that, by downloading and or using this photograph, User is consenting to the terms and conditions of the Getty Images License Agreement. (Photo by Ron Schwane/Getty Images)

The Cleveland Cavaliers have lost five straight and Coach J.B. Bickerstaff is blaming the team’s hot start for a lack of recent results. At a time when things may or may not be contentious in the locker room, it would be unfortunate if he used a grabby animal metaphor that overshadowed his concrete ideas to stop the skid.

“I think honestly we got kind of a fat cat mentality,” Bickerstaff said at a press conference Wednesday night. “We went out and won eight games in a row, everybody was giving us love and praising us, and we got really comfortable.”

In Bickerstaff’s most recent press conference, he did not blame the Cavs’ recent troubles on their hot start alone, but he did cite it as the epicenter. He went on to say that the team’s defense began to slacken because of the offense’s stellar efficiency through the first nine games. He even said that his players’ confidence in their offense was deserved. But he also called himself and his players fat cats, and that’s a claim worth analyzing.

"It's my responsibility to search and find the guys that are most willing to play the way we want to play."

Through the Cavaliers’ first nine games, the team undoubtedly took care of business on both sides of the floor after an opening day loss to the Raptors. But upon closer inspection, the only highly touted team Cleveland played after Toronto was the Celtics, who they defeated twice on Oct. 28 and Nov. 2.

On paper, the Celtics are a superior team to the Cavaliers, which would make Bickerstaff’s claim of a hot start and subsequent regression seem legitimate. But in context, Cleveland’s two overtime victories over last year’s Eastern Conference champs make more sense in the early regular season. Either could have easily ended in defeat, and the Cavs matched up well with a Celtics team that was missing defensive contributor Robert Williams and entrenched in drama surrounding Coach Ime Udoka. The return of Cavs point guard Darius Garland from injury for the second game was also extremely timely and proved to make a difference in a 114-113 win.

Beyond those two wins against Boston, Cleveland have beat the Bulls, Wizards, Magic, Knicks, Pistons and Lakers. None of those six teams rank highly in either offensive or defensive efficiency and all are considered outsiders at best in terms of playoff contention at this point in the season.

Bickerstaff said that he first noticed the team’s complacency when they traveled West, but the team soundly thumped the Lakers on Nov. 6. The trouble actually began against the Clippers, a team sorely missing Kawhi Leonard but nevertheless finding success this season through improved defensive play. The two evenly matched teams played to the buzzer but Los Angeles rallied late to eke out a 119-117 win. It happens.

With the Cavs’ streak busted, a bounce-back performance against the Kings could have kept public perception high. But Sacramento’s highly efficient run-and-gun offense was unlike anything Cleveland’s defense had to deal with earlier in the season. The team got run off its feet in a 127-120 defeat.

The Warriors were next. Steph Curry scored 40 and Cleveland lost. Go figure. It was best for everyone to move on quickly to the Timberwolves, but Cleveland ran into some injury trouble and had to compete without starters Donovan Mitchell and Jarrett Allen. Despite a Herculean 51-point effort from Garland, an alleged fat cat, Minnesota won 129-124.

After four straight losses, all of which were sensible in their own ways, the Cavs had to face the Bucks in a matchup that would have been a nightmare regardless of the circumstances. Still without Allen down low, the team somehow managed to hold Giannis Antetokounmpo to 16 points, but Brook Lopez and Jordan Nwora made up the difference with brutalizing 29- and 21-point performances, respectively. The Cavs lost again 113-98.

All this fat cat business is starting to feel a little silly, huh?

Maybe it’s true that the Cavaliers went from a giant-slaying, tenacious 1-seed to the league’s complacent turnstile in the span of two weeks. Maybe Bickerstaff is right. But maybe, just maybe, teams running through Giannis and Curry are a little bit better than the Magic and Pistons. Maybe Cleveland is stronger with Mitchell and Allen on the floor every night.

The Cavaliers started the season hot, but a tougher schedule on the West Coast and a few poorly timed injuries have gotten the better of them in recent games. It’s hard to evaluate their performance and conclude otherwise from an outsider’s perspective, and that’s the point.

They’re an exciting young team with a legitimate shot at a playoff spot, and the coaching staff is going to do everything in their power to shake things up and get back on track. It’s their job to expect more than anyone else. But the reality of the situation is that the Cavaliers aren’t the best team in the Eastern Conference, nor are they fat cats riding on their reputation. They are what they are.