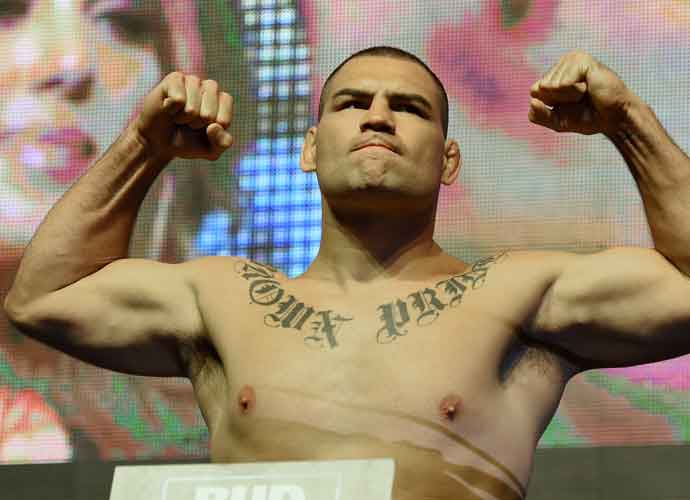 LAS VEGAS, NV - JULY 08: Mixed martial artists Cain Velasquez poses on the scale during his weigh-in for UFC 200 at T-Mobile Arena on July 8, 2016 in Las Vegas, Nevada. Velasquez will meet Travis Browne in a heavyweight bout on July 9 at T-Mobile Arena. (Photo by Ethan Miller/Getty Images)

For the second time, retired UFC great and former heavyweight champion Cain Velasquez was denied bail in an attempted murder case at a motion hearing on Monday.

Velasquez has been in police custody since February after he was arrested for attempted murder and other gun-related charges after allegedly chasing down a man, Henry Goularte, and shooting into his vehicle. Goularte’s stepfather, Paul Bender, was also in the vehicle and was struck by one of the bullets. Goularte was recently charged with molesting a young relative who was closely related to Velasquez. Goularte had recently been released from police custody when Velasquez attacked him.

Judge Shelyna Brown decided against allowing Velasquez bail due to his “reckless regard for human life.” Velasquez’s attorney, Mark Garages, said he was very disappointed in Judge Brown’s decision saying, “It’s especially outrageous when you realize that the accused pedophile and his stepfather, who did nothing but protect [Goularte] at the daycare center, are parading around like victims.”

According to court documents, the child was under 10 years old, and while in the custody of Goularte at the daycare center was repeatedly violated potential “100 times. Goularte was released from police custody on Feb. 25 without bail. He was ordered to stay in home detention, remain 100 yards away from any child under 14 and wear an electronic monitoring bracelet. According to the district attorney Josh Rosen, this was against his orders. “The sad tragedy is that Mr. Velasquez chose to take the law into his own hands, endangering the public and everyone in the truck. This act of violence also causes more pain and suffering to his family,” Rosen said.

Other mainstays in UFC have recently come out in support of Velasquez with heavyweight champion Chuck Liddell pleading for Velasquez’s release and longtime teammate Khabib Nurmagomedov reaffirming his support.

There will be a plea hearing on June 10, with a pretrial probable cause hearing in June or July following the plea hearing.