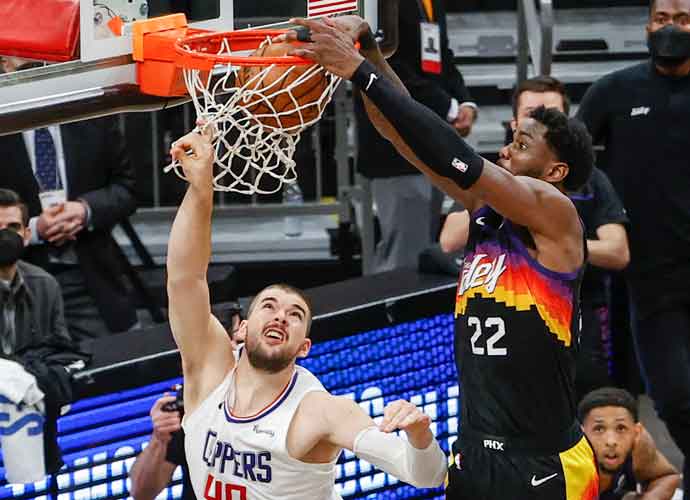 PHOENIX, ARIZONA - JUNE 22: Deandre Ayton #22 of the Phoenix Suns dunks the ball over Ivica Zubac #40 of the LA Clippers during the fourth quarter in game two of the NBA Western Conference finals in-which the Phoenix Suns defeated the LA Clippers 104-103 at Phoenix Suns Arena on June 22, 2021 in Phoenix, Arizona. NOTE TO USER: User expressly acknowledges and agrees that, by downloading and or using this photograph, User is consenting to the terms and conditions of the Getty Images License Agreement. (Photo by Christian Petersen/Getty Images)

The Phoenix Suns pulled off one of the most memorable plays in NBA Playoffs history. It was perhaps the most clutch play in the history of the franchise considering the Suns have never won an NBA championship.

The Suns were down with 0.9 seconds left in Tuesday’s Game 2 against the Los Angeles Clippers. The Clippers were up 103-102, and with barely any time left, and the Suns needed a quick play to steal the game. Phoenix head coach Monty Williams huddled his team during a timeout and devised a plan to win the game. The plan was for Jae Crowder to inbound an alley-oop pass to Deandre Ayton.

Once the timeout ended, it was time to put the plan into motion. As Crowder inbounded the pass, Devin Booker provided a key screen for Ayton, allowing the big man to get open and stuff the ball over Clippers’ center Ivica Zubac for the buzzer-beater victory. The play was beautifully executed to the Phoenix fans’ delight, as the Suns now lead the series 2-0.

DeAndre Ayton throws down the lob off the pass from Jae Crowder to put the Suns up 2-0 in the series! ⏰ @GatoradeUK Play of the Night 👏 pic.twitter.com/IYH9ojCWmW

The alley-oop game-winner ended a Clippers rally that was led by Paul George, who finished with 26 points. George made a layup with 31 seconds left to give the Clippers a 101-100 lead. On their next offensive possession, he converted a 22-footer to put Los Angeles up 103-102.

While they were up, George had an opportunity to increase the Clippers’ lead when he was sent to the free-throw line. George, who is an 85% free throw shooter, missed both free throws with 8.2 seconds left in the game. This gave the Suns hope, and they executed flawlessly down the stretch.

The Suns were led by Cameron Payne, who finished with a career-high 29 points and nine assists. Ayton added 24 points and 14 rebounds, while Booker had 20 points.

“We just had no answer for Cameron Payne,” Clippers head coach Tyronn Lue said. “He got downhill all night. His speed and his quickness really hurt us all night.”

Phoenix has won a franchise-record nine straight playoff games. Meanwhile, the Clippers are in a 2-0 hole for the third time in the playoffs. Los Angeles is still confident because they have come back from this deficit before. After losing the first two games in the first round against the Mavericks, the Clippers finished Dallas off in Game 7. In the following round, Los Angeles won four straight games against the top-seeded Jazz after losing the first two games on the road.

Phoenix did what they were supposed to by holding home-court advantage. The series heads to Los Angeles for Game 3 on Thursday night. Without Kawhi Leonard, who is still out due to injury, the Clippers have an incredibly tough task ahead of them. However, it would be foolish to count them out after what they accomplished in the first two rounds of the postseason.