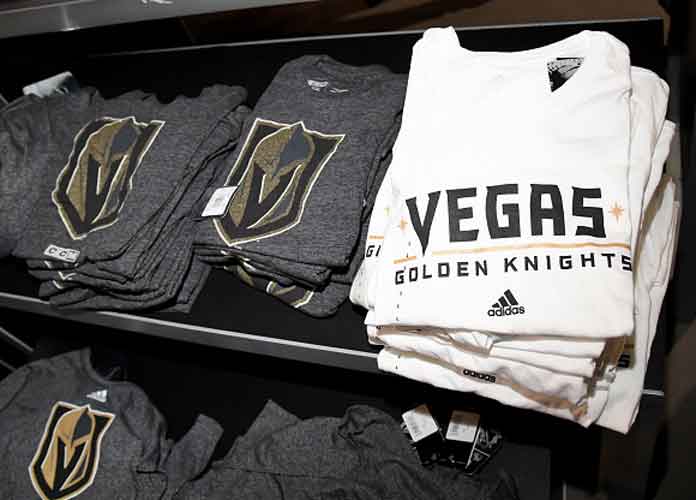 LAS VEGAS, NV - NOVEMBER 22: Vegas Golden Knights apparel is displayed after being announced as the name for the Las Vegas NHL franchise at T-Mobile Arena on November 22, 2016 in Las Vegas, Nevada. The team will begin play in the 2017-18 season. (Photo by Ethan Miller/Getty Images)

The Vegas Golden Knights may be enjoying a stellar first season, but the NHL expansion team is now facing criticism over its name and logo.

The United States Army filed a challenge with the U.S. Trademark Trial and Appeal Board on Wednesday, in which it claimed the Golden Knights’ name is associated with the military branch.

Army states it has used the Golden Knights name since 1969 in connection with its parachute team and with recruiting, and added it owns  “common law rights in color scheme black+gold/yellow+white.”

In the filing, the Army said the NHL franchise “has chosen and used a similar black+gold/yellow+white color scheme on uniforms, marketing, advertisements and its hockey arena, mimicking the opposer’s colors and further adding to the likelihood of confusion of the public.”

The Golden Knights (29-10-2), who are first in the Pacific Division, unveiled their name and logo to the public in November 2016 after filing to trademark other options.

The Army initially voiced its opposition to the NHL team’s emblem — which features a black and gold helmet on a crest — in September 2017; the U.S. Patent and Trademark Office gave 30 days for anyone to oppose. The Army received an extension until Wednesday.

The NHL team’s owner Bill Foley graduated from the United States Military Academy at West Point in 1967 and was rumored to be strongly considering naming the team the Black Knights, Army’s nickname.

In its filing, the Army noted an article in the Washington Post in June in which the team’s general manager George McPhee makes the connection.

“Bill Foley is a West Point guy, sort of using those colors,” McPhee said to the newspaper. “You know his history at West Point. You know about the classmates he had lost serving this country. So, those colors mean a lot to us.”

The Golden Knights took issue with the Army’s stance on the matter.

“We strongly dispute the Army’s allegations that confusion is likely between the Army Golden Knights parachute team and the Vegas Golden Knights major-league hockey team,” the team said in a statement Thursday.

“Indeed, the two entities have been coexisting without any issues for over a year (along with several other Golden Knights trademark owners) and we are not aware of a single complaint from anyone attending our games that they were expecting to see the parachute team and not a professional hockey game. That said, in light of the pending trademark opposition proceedings, we will have no further comment at this time and will address the Army’s opposition in the relevant legal forums.”

The team has until Feb. 19 to file its response to the appeal board.

The U.S. Patent and Trademark Office initially rejected the Vegas Golden Knights logo due to its similarity to that of the College of Saint Rose. NHL deputy commissioner Bill Daly replied by saying “it is not our intention to reconsider the name or logo of this franchise.”

The Golden Knights have become one of the most popular teams in the NHL in terms of merchandise sales. The team also earned the adulation of hockey fans and the rest of the league following their touching tribute to the victims of the October 1 mass shooting in Las Vegas before their home opener. The Knights had first responders who helped save lives during the massacre accompany them onto the ice, and the names of the 58 deceased individuals were listed on the rink. A minute of silence was also held. The shooter also died for a total of 59 deaths.

Las Vegas has a Western Conference-leading 60 points, and next hosts Edmonton on Saturday night.

LAS VEGAS, NV – NOVEMBER 22: Vegas Golden Knights apparel is displayed after being announced as the name for the Las Vegas NHL franchise at T-Mobile Arena on November 22, 2016 in Las Vegas, Nevada. The team will begin play in the 2017-18 season. (Photo by Ethan Miller/Getty Images)