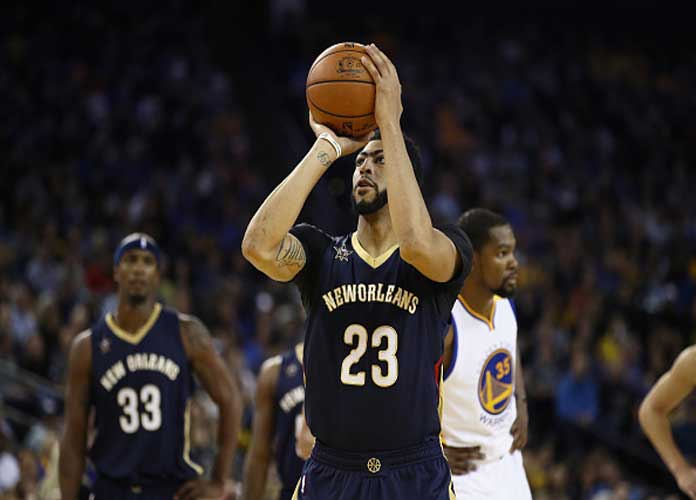 OAKLAND, CA - NOVEMBER 07: Anthony Davis #23 of the New Orleans Pelicans in action against the Golden State Warriors at ORACLE Arena on November 7, 2016 in Oakland, California.

Earlier this month, Anthony Davis was traded from the New Orleans Pelicans to LeBron James‘ Los Angeles Lakers to combine two of the best players in the NBA in L.A. Davis, an obviously expensive player, waived a $4 million add on from the Lakers to help contribute to opening more cap space for the team, putting them in the market for another big-time player to join them.

According to ESPN’s Adrian Wojnarowski, the Lakers can pursue a free agent with a max-contract now thanks to Davis, meaning they have $32 million to spend on potentially another All-Star player. This free-agency offers plenty of potential options for the Lakers to shop around for, including the likes of NBA Finals MVP Kawhi Leonard, Brooklyn Nets‘ guard D’Angelo Russell or even Boston Celtics‘ guard Kyrie Irving.

Davis and James share the same agent, Rich Paul, who conveniently convinced Davis to not take the $4 million add on to help the team invest in other players in pursuit of a dominate team to win the NBA Finals. A plethora of people on Twitter are speculating James’ hand in these contract talks, possibly convincing Davis not to take the money from the cap space, but rather an equivalent or perhaps even more add-on in their new movie Space Jam 2, who James is a producer of and Davis is staring in.

So Anthony Davis will waive his $4.1 million trade kicker to enable the Lakers to sign a max player in free agency and then will be paid $4.1 million for a cameo in Space Jam 2. Duh https://t.co/X2qsPqzvli

According to reports, the Lakers are going to trade former Michigan Wolverine Moritz Wagner, Issac Bonga, Jermerrio Jones and a future 2022 pick to the Washington Wizards to further open their cap space. Rob Pelinka is doing a complete re-haul ahead of the new signing Davis. If this trade is confirmed after the free-agency officially opens Sunday, the Lakers would have completed 10 players gone for the one Anthony Davis. Pelinka and his Lakers team are going to continue to have a offseason filled with breaking news and influencing the rest of the NBA and free-agency, as they are in the driver seat with the appealing two-star duo with tons of money to work with.

Lakers GM Rob Pelinka has found a way to complete the Anthony Davis trade on July 6 with max space to spend on a single free agent — or divide the money among multiple players.