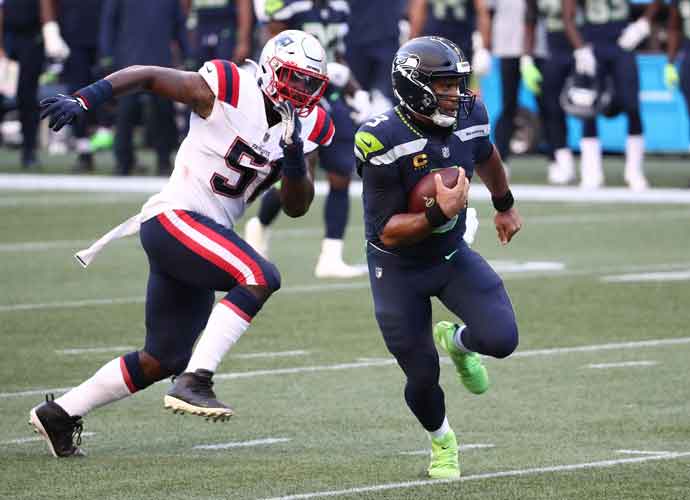 SEATTLE, WASHINGTON - SEPTEMBER 20: Russell Wilson #3 of the Seattle Seahawks runs with the ball against Ja'Whaun Bentley #51 of the New England Patriots in the first quarter at CenturyLink Field on September 20, 2020 in Seattle, Washington. (Photo: Getty)

Despite rumors surrounding a Russell Wilson trade, Wilson denies ever requesting a trade. Fortunately for Seattle, it doesn’t look like Wilson is going anywhere in the near future.

Additionally, Seattle made moves to improve their team and to keep the quarterback happy. One such move was the team trading for offensive lineman Gabe Jackson. Another key offseason move was extending wide receiver Tyler Lockett’s contract. This allowed the team to keep the great wide receiver tandem of Lockett and DK Metcalf.

The Seahawks have one of the best aerial attacks in football. If their defense improves, they could make a Super Bowl run in the NFC.

CLICK HERE TO GET THE BEST SEATTLE SEAHAWKS TICKET DEALS!

NFC West: Last season, the Seahawks narrowly won the division by winning their final two games over division foes, the 49ers and the Rams. With Wilson recommitted to the team and ready to give it his all, Seattle will remain the favorites to win the division. The only threat within the division is the Rams, who significantly upgraded their offense by trading for quarterback Matthew Stafford.

Matchups: Seattle has a tough stretch of games to begin the season. During the first six-week stretch of the season, not only will Seattle have to face the Colts, Titans and Steelers (all playoff contenders), but they will also have to face two divisional rivals in the 49ers and the Rams. Other noteworthy games include contests against the Packers and Saints.

Overall: Seattle is poised to make another play at the NFC West division and a long playoff run as long as Wilson is under center. Not only is he one of the most talented quarterbacks in the NFL, but he is also perhaps the most clutch (aside from the GOAT Tom Brady). With one of the best passing attacks in the league along with a strong running game featuring Wilson’s scrambling ability and Chris Carson out of the backfield, opposing defenses will run into all sorts of matchup problems. After last season’s disappointing Wild Card exit, the Seahawks are looking to return to the Super Bowl in 2021.

Prediction: The Seahawks will win the division with a 12-5 record, narrowly finishing ahead of the Rams.

CLICK HERE TO GET THE BEST SEATTLE SEAHAWKS TICKET DEALS!