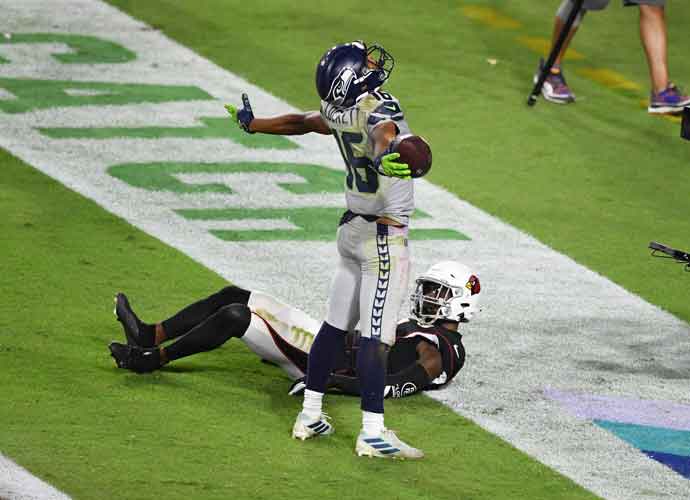 GLENDALE, ARIZONA - OCTOBER 25: Tyler Lockett #16 of the Seattle Seahawks reacts after catching a touchdown while being defended by Patrick Peterson #21 of the Arizona Cardinals during the second quarter at State Farm Stadium on October 25, 2020 in Glendale, Arizona. (Photo by Norm Hall/Getty Images)

According to what a source told ESPN‘s Adam Schefter on Wednesday, the Seattle Seahawks are giving wide receiver Tyler Lockett a $69.2 million contract extension over four years, including $37 million guaranteed.

Lockett, 28, was a third-round pick by Seattle in 2015. He made the Pro Bowl and was a first-team All-Pro as a returner in his rookie season. After returning from a compound leg fracture late in 2016, he earned the starting wide receiver role in 2017. Since then, he has been a staple of Seattle’s aerial attack.

Last season, Lockett and D.K. Metcalf became only the second pair of Seahawks receivers in team history to each top 1,000 yards in the same year. Since 23-year old Metcalf is one year away from being eligible for his next payday, there was no guarantee that Seattle would pay Lockett with a third contract.

Lockett was set to have the third-largest cap hit of any Seahawks player in 2021 with $14.95 million. However, his extension lowered that number to around $7 million, according to ESPN’s source.

Lockett was entering the final season of a three-year, $31.8 million extension signed in 2018. Since then, he has had the best three seasons of his career and has 28 receiving touchdowns and 3,076 yards.

Lockett is also known for improbable catches. According to NFL Next Gen Stats, among players with at least 200 targets, he has the second-highest catch percentage over expectation since 2018 at plus-12%. This was clear during an overtime loss against the Cardinals last season, as Lockett turned in the most productive game of his career. He showed his best stuff with 15 catches for 200 yards and three touchdowns.

Lockett will continue to be one of the go-to offensive weapons at quarterback Russell Wilson’s disposal in 2021 and beyond.