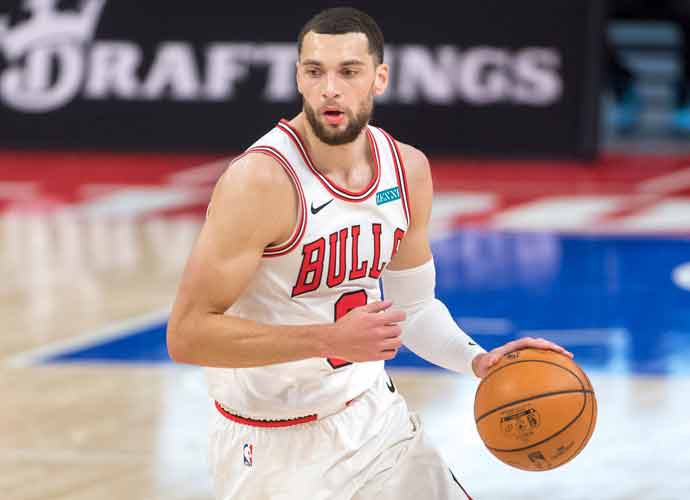 DETROIT, MICHIGAN - MARCH 21: Zach LaVine #8 of the Chicago Bulls handles the ball during the third quarter of the game against the Detroit Pistons at Little Caesars Arena on March 21, 2021 in Detroit, Michigan. NOTE TO USER: User expressly acknowledges and agrees that, by downloading and or using this photograph, User is consenting to the terms and conditions of the Getty Images License Agreement. (Photo by Nic Antaya/Getty Images)

After Wednesday’s practice, Chicago Bulls‘ All-star guard, Zach LaVine, underwent an MRI which revealed a left thumb injury that he had called “a small tear in the tendon.”

Bulls head coach Billy Donovan said he wouldn’t term the injury severe, but called it “more than mild.” LaVine’s status going forward, Donovan added, will be based on how he responds physically and a dialogue with the team’s medical staff.

“Small tear in the tendon, almost like a Grade 1 to 2 sprain.” — Zach LaVine said of thumb injury. Has it taped up pic.twitter.com/QiD1Z4xLW0

“That will be the medical and Zach sitting down and talking, figuring out what he thinks is best and what the pain is like and how much he can tolerate and what he can do,” Donovan said when asked if LaVine missing one or more games is on the table. “I think those are things Zach and the medical staff will communicate and talk about — certainly after today’s practice and probably after shootaround.”

Lavine has stated that he suffered the injury during the Bulls’ game win over the Toronto Raptors on Monday.

“I don’t know yet,” LaVine said when asked if the injury could worsen if he attempts to play through it. “I think right now it’s just trying to figure out how to manage the pain and keep it safe, and then going forward I’ll get more information on it if I plan on playing with it.”

LaVine has played through bump-and-bruise type injuries in the past, and said, “if it’s a pain thing and I’m able to play, then I can deal with it.”

“Obviously I don’t want to put myself in any danger, I don’t have all the information on it yet. We’ll see how I feel tomorrow, and going from there.”

“You know me, I try to play through everything. If I’m able to, I will. If not we’ll see how it goes,” LaVine said.

The Bulls have to play next Thursday night in their home stadium against the New York Knicks, then host the Utah Jazz on Saturday. Who knows if their star guard will be able to play, but one thing is for sure, the Bulls will have to scramble to fill such an important spot in the team.