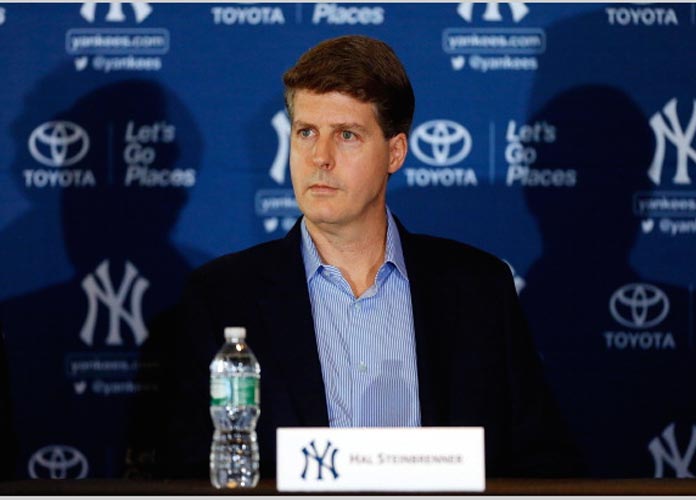 NEW YORK, NY - FEBRUARY 11: Managing general partner and co-chairperson Hal Steinbrenner of the New York Yankees looks on during a news conference introducing Masahiro Tanaka (not pictured) to the media on February 11, 2014 at Yankee Stadium in the Bronx borough of New York City. (Photo by Jim McIsaac/Getty Images)

The mostly high sought Latin American international prospect in nearly a decade, Jasson The Martian’ Dominguez, has reportedly signed a deal with the New York Yankees that includes a $5.1 million signing bonus.

He’s 16. He’s a switch-hitting center fielder with power, speed and a rocket arm. He’s nicknamed The Martian — because, they say, there’s no way he’s from this world. And come July 2, he’s expected to be the newest New York Yankee.

Dominguez, 16, is a 5’11”, 195-pound center fielder who is regarded by scouts as a classic five-tool player. Dominguez is a powerful switch-hitter with top-end speed and a powerful throwing arm.

🔊SOUND ON🔊
Oh nothing to see here just a young GOAT in the making jasson dominguez and my mood below@yankees set to sign 16Y/O Top International prospect (🇩🇴) a switch hitting OF with more tools than HomeDepot . tag someone that needs to see this as the rich get richer pic.twitter.com/W68ozUGQMb

The Yankees had $5.4 million to spend this season for their international bonus pool money, and have devoted 95% of it to sign Dominguez. The Yankees $5.1 million bonus offered to Dominguez is a club record. Previously, the Yankees high for a signing bonus to an international prospect was $3.2 million.

Besides the Yankees, the Texas Rangers, Los Angeles Angels, and Tampa Bay Rays were all extremely keen on attempting to sign Dominguez as well. According to ESPN, the losing suitors of Dominguez are all currently lamenting the loss of whom evaluators firmly believe will be a star before too long, much like Juan Soto, Ozzie Albies, or Ronald Acuna Jr.

For those of you wondering, grab a change of underwear and then watch 16-year old Jasson Dominguez lay into a pitch. He will be in the Yankees organization tomorrow. pic.twitter.com/PfbHhW28vb

Since arriving at Ivan Noboa’s academy as a 13-year-old, Dominguez has stood out among all the prospects according to Noboa. According to Noba, since his arrival, Dominguez has had an extremely developed physique and an ability to hit for extreme power. Scouts have dubbed Dominguez with the nickname, ‘The Martian’ (El Marciano), due to his skillset, which is said to be out of this world.

HAPPY JASSON DOMINGUEZ DAY, YANKEES FANS!
– Nicknamed "The Martian" because there was no way he could be from this world
– Still only 16 years old
– Draws comparisons to Mantle/Trout
– Switch-Hitting, Five Tool CF
– Arguably the top international prospect in major league history pic.twitter.com/CtNC8HwoVo