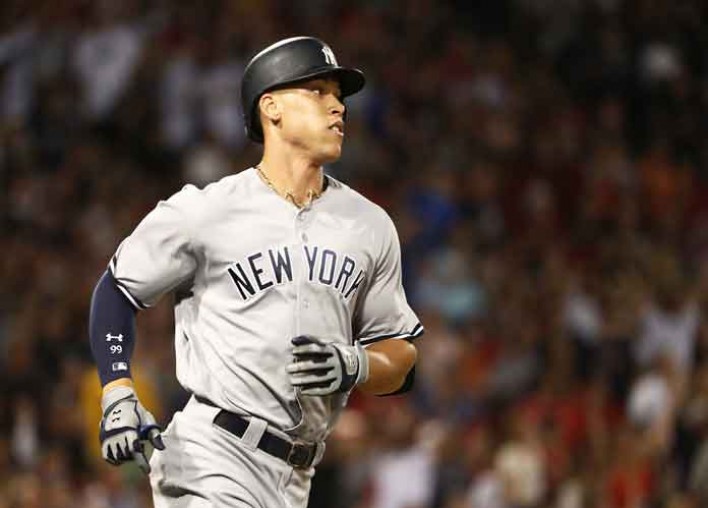 BOSTON, MA - JULY 16: Aaron Judge #99 of the New York Yankees begins to the round the bases before he is robbed of a home run by Jackie Bradley Jr. #19 of the Boston Red Sox in the eighth inning of game two of a doubleheader against the New York Yankees at Fenway Park on July (Photo by Adam Glanzman/Getty Images)

The AL East is the tightest division in the MLB, with just a half game between the Tampa Bay Rays and the New York Yankees.

Both the Yankees and the Rays are now 5-5 in their last 10 games after the Yankees tied a series with the Chicago White Sox, and the Rays tited the Los Angeles Angels this past weekend. Monday pitches off with the Yankees leading the Rays 4-2 this season, with Giancarlo Stanton and Aaron Judge both set to return after their injuries. The Yankees are receiving serious firepower ahead of an important series that could later define the playoff picture.

In 20 games with the Yankees, Judge has hit five home runs and 11 RBIs so far this season, while Stanton has only played three games this season, hitting .250.

For Monday’s game, Yonny Chirinos will start out pitching for the Rays, while Masahiro Tanaka starts for the Yankees. The Rays’ pitching has been shy of satisfactory these last five games, giving up four or more runs ahead of a high-scoring Yankees team that will have game-changing sluggers returning. The Yankees are in the top eight teams this season in home runs, despite not having Judge and Stanton for the better part of the season. The Yankees are also on a 19-game streak of hitting at least one home run in a game, and had 12 hits in their most recent 10-3 win over the White Sox. Chirinos for the Rays is 2-1 in his career against the Yankees with a 2.33 ERA.

The Yankees are hosting Monday night, with -133 favorites, with the o/u being 9 runs. But the Yankees are just 2-6 in Tanaka’s last eight starts and 1-4 in his last five home games. The Rays are currently dominating in their division and are 6-1 in their last seven games against their fellow AL East competitors.

Monday’s game starts at 7:05 p.m. EST in the Bronx at Yankee Stadium, broadcasted by YES Network. The other two games of the series will be played Tuesday and Wednesday, with both teams remaining at the Big Apple throughout the week.