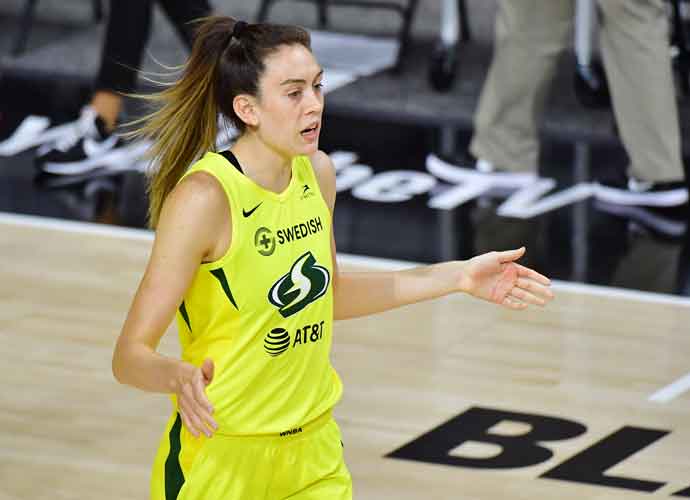 PALMETTO, FLORIDA - OCTOBER 06: Breanna Stewart #30 of the Seattle Storm meets teammates after a timeout during the first half of Game 3 of the WNBA Finals against the Las Vegas Aces at Feld Entertainment Center on October 06, 2020 in Palmetto, Florida. NOTE TO USER: User expressly acknowledges and agrees that, by downloading and or using this photograph, User is consenting to the terms and conditions of the Getty Images License Agreement. (Photo by Julio Aguilar/Getty Images)

The moment was captured and shared by the Storm on Twitter. “Ring season continues!” the tweet read.

The tweet’s caption is a reference to the team’s recent WNBA Championship victory. Stewart led the team to a WNBA championship win by sweeping the Las Vegas Aces in the WNBA finals last season. It was Stewart’s second championship, and she was named the WNBA Finals MVP for the second time in her career.

Xargay is a Spanish guard who has played in Europe since 2016. Xargay had spent two seasons playing with the Mercury in 2015-2016 before opting to not return to the WNBA. Since then, she has played in Europe with different teams and has achieved success. Xargay won the Spanish Cup Championship three times with CB Avenida and two Spanish League championships as well. Furthermore, Xargay helped USK Praha win three Czech league championships from 2016-2018.

Stewart’s Storm is scheduled to take on the Mercury in a preseason game on Saturday, a week ahead of their May 15 regular-season tipoff. After three seasons away from the Mercury, Xargay is on the preseason roster for Phoenix. The Spaniard has a chance to make it to the main roster and return to the WNBA again.