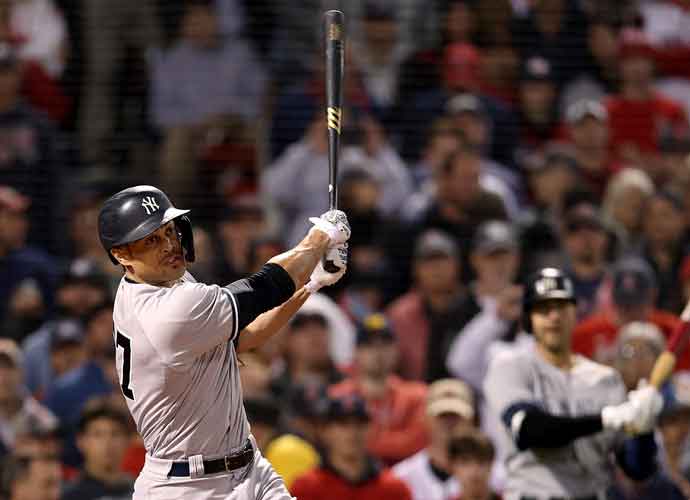 BOSTON, MASSACHUSETTS - OCTOBER 05: Giancarlo Stanton #27 of the New York Yankees watches his home run against the Boston Red Sox during the ninth inning of the American League Wild Card game at Fenway Park on October 05, 2021 in Boston, Massachusetts. (Photo by Maddie Meyer/Getty Images)

Tuesday’s AL Wild Card Game between the Boston Red Sox and the New York Yankees was a highly anticipated one with each team having their backs against the wall. The victor would go on to play in the ALDS against the 100-win Tampa Bay Rays, who won the stacked AL East that featured four 90-win teams. Both squads played a recently as late September 26, the Yankees’ sweeping the Red Sox with the help of Giancarlo Stanton‘s dominant three-homer, 10 RBI series.

The game even had historical significance, given the precedent of the 1978 AL East tie-breaker game, defined by the iconic Bucky Dent homer in the seventh inning to give the Yanks the lead.

Alas, last night’s game did not turn out the way Yankee fans had hoped for.

Gerrit Cole took the mound for New York while former Yankee Nathan Eovaldi started for the Red Sox. Cole, who was putting up Cy Young-worthy number throughout most of the season, had been struggling over the past five games, going 2-2 with a 6.15 ERA, in part due to a nagging left hamstring injury. Last night was a test to see if the Yankees $324 million man would be able to deliver when it mattered most.

The Bronx Bombers got off to a seemingly promising start in the first inning, coming out aggressive in the box and making solid contact off Eovaldi. With two outs in the bottom of the first, Stanton launched a slider more than halfway up the Green Monster, however, it ultimately ended up being a loud single. The ball seemed to be a goner off the bat, fooling everyone from Stanton himself to Yankees’ play-by-play announcer John Sterling, which at least made for a hilarious call.

Yankees announcer John Sterling already with the call of the night 🤣

The Red Sox set the tone for the night in the bottom of the first inning. After giving up a two-out walk to blossoming star Rafael Devers, Cole hung a changeup right down the middle that was sent 427 feet over the center-field wall by Xander Bogaerts, giving the Sox a 2-0 lead.

Cole’s woes continued in the top of the third. Leading off the inning, Kyle Schwarber pummeled a 435-foot to right field, extending the lead to 3-0. The home run was eerily reminiscent of what had transpired during the 2015 Wild Card Game.

2015: Kyle Schwarber hits a home run in the 3rd inning of the Wild Card Game off of Gerrit Cole to give his team a 3-0 lead

2021: Kyle Schwarber hits a home run in the 3rd inning of the Wild Card Game off of Gerrit Cole to give his team a 3-0 lead pic.twitter.com/Md1Lz9aojJ

After allowing a walk to Devers, Cole was pulled from the game by Aaron Boone after just two innings of work.

Eovaldi, on the other hand, was dealing, striking out eight of the first 18 batters and retiring 11 straight during one stretch.

Yankees’ first baseman (and Schwarber’s former Cubs teammate) Anthony Rizzo was the only hitter to tag the right-hander, pulling a curveball around Pesky’s Pole for a solo home run to cut the lead to 3-1.

To the shock of many, including Eovaldi, Red Sox manager Alex Cora decided to remove his pitcher from the game after a subsequent in-field hit by Aaron Judge.

“When I went to the mound, he gave me this look, like, ‘What are you doing?'” Cora said after the game.

“It’s just such a tough game to manage. If he stays there and he hits a home run, then oof. We felt like our bullpen was ready for the rest of the game. We got lucky that the ball stayed in the ballpark, we made a great play, then we did a great job the rest of the game.”

The Red Sox thus brought in reliever Ryan Brasier to face Stanton. The substitution initially appeared to backfire, as the Yankees DH crushed a 400-foot line-drive off the Monster, again. The ball would have been a home run in 11 MLB stadiums. Instead, it ended up resulting in a costly out that would put a halt to the Yankees’ mid-game comeback, as the Sox nailed Judge at home plate after a perfectly executed relay.

The Red Sox added a few more insurance runs with two clutch hits by left fielder Alex Verdugo, slapping an RBI-double in the bottom of the sixth and then lining a two-run single in the top of the seventh to put his team up for good.

The Yanks did add a run in the top of the ninth inning with the scorching hot Stanton hitting an opposite field home run just inside the pole.

However, one cannot help but acknowledge the irony that Stanton’s weakest hit ball of the evening was the one that ended up going over the fence. It just may be the best way to summarize last night’s misfortune.