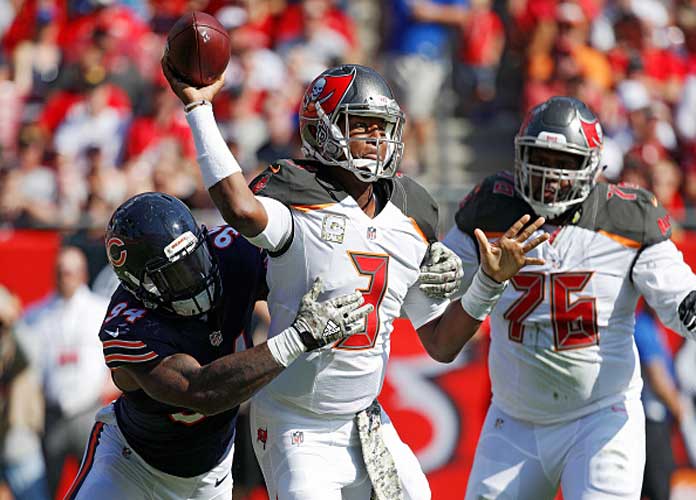 Jameis Winston threw for 312 yards and two touchdowns to lead the Tampa Bay Buccaneers to a 36-10 home victory over the error-prone Chicago Bears on Sunday.

Winston tossed a particularly incredible 39-yard touchdown pass to Mike Evans in the third quarter. The QB scrambled 23 yards backward into his own end zone and avoiding the entire Bears pass rush and a safety to find Evans at the Chicago 38.

Winston, the No. 1 pick in last year’s draft, also threw for TDs of 10 yards to Cameron Brate and 43 yards to Freddie Martino, the latter set up by the deep toss to Evans.

Martino, a former practice squad player with just two career catches, scored his first NFL touchdown after a delay penalty pushed the Bucs (4-5) back to the 43.

Two weeks after returning from injury and helping the Bears (2-7) defeat the NFC North leader Vikings, Jay Cutler had four turnovers (two interceptions, two fumbles) one resulting in a third-quarter safety that put Tampa Bay up 29-10.

The hosts sacked Cutler four times. Although the Bears are last in the NFL in scoring, it was a confidence-building performance from a defense that yielded 73 points and 1,087 yards – including 857 passing – in home losses to Oakland and Atlanta the previous two weeks.

Cutler missed five games with a sprained right thumb before performing well and not turning the ball over to Minnesota.

Chicago had a bye last week, but the momentum they built against the Vikings was stopped against the Bucs.

The Bears scored on Cameron Meredith’s 50-yard TD catch on the final play of the first half. Cutler went 16 of 30 for 182 yards, and Tampa Bay’s Chris Conte returned a first-quarter interception 20 yards to give the Bucs a 7-0 lead.

The Bucs will next visit the Kansas City Chiefs on Sunday, while the Bears will visit the New York Giants that day.

TAMPA, FL – NOVEMBER 13: Jameis Winston #3 of the Tampa Bay Buccaneers tries to pass while under pressure from Leonard Floyd #94 of the Chicago Bears in the first quarter of the game at Raymond James Stadium on November 13, 2016 in Tampa, Florida. (Photo by Joe Robbins/Getty Images)