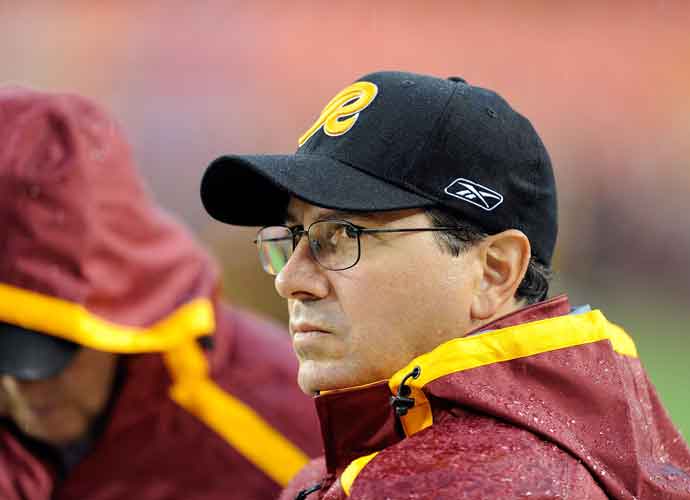 LANDOVER, MD - AUGUST 22: Owner Daniel Snyder of the Washington Redskins watches warm-ups before the game against the Pittsburgh Steelers at Fed Ex Field on August 22, 2009 in Landover, Maryland. (Photo by G Fiume/Getty Images)

They came out during a congressional roundtable investigating the team’s “toxic workplace” and what some members of Congress are calling the NFL’s “cover-up.”

Former team marketing and events coordinator Tiffani Johnston says that she was “strategically” placed next to Snyder at a work dinner “not to discuss business, but to allow him, Dan Snyder, to place his hand on my thigh under the table.

“I learned that job survival meant I should continue my conversation with another co-worker rather than call out Dan Snyder right then in the moment. I also learned later that evening how to awkwardly laugh when Dan Snyder aggressively pushed me toward his limo with his hand on my lower back, encouraging me to ride with him to my car. I learned how to continue to say no even though a situation was getting more awkward, uncomfortable, and physical.

“I learned that the only reason Dan Snyder removed his hand from my back and stopped pushing me toward his limo was because his attorney intervened and said ‘Dan, Dan, this is a bad idea. A very bad idea, Dan.’ I learned that I should remove myself from Dan’s grip while his attorney was distracting him.”

Snyder apologized via email for past misconduct within the organization but denied these new allegations.

“I have acknowledged and apologized multiple times in the past for the misconduct which took place at the Team and the harm suffered by some of our valued employees,” he said. “I apologize again today for this conduct, and fully support the people who have been victimized and have come forward to tell their stories.

“While past conduct at the Team was unacceptable, the allegations leveled against me personally in today’s roundtable—many of which are well over 13 years old—are outright lies. I unequivocally deny having participated in any such conduct, at any time and with respect to any person.”

An NFL spokesman said, “The NFL is reviewing and will consider Ms. Johnston’s allegations as we would any other new allegations regarding workplace misconduct at the Washington Commanders. We will determine any further action as appropriate.”

Johnston said the incident occurred either in 2005 or 2006 at the Oceanaire restaurant in downtown Washington. A corroborating letter from former employee Jason Friedman was presented Thursday.

Johnston added that she had not shared the incident with Beth Wilkinson, the attorney conducting the league’s investigation, for fear of retaliation.

Johnston’s testimony also alleges Snyder demanded that an unedited photo of Johnston in lingerie for a promotional calendar be altered, enlarged, and sent to his office.

“I learned that this demand was made urgently because they knew that the graphic artist was getting ready to photoshop my personal areas before the edit-approve went before all of the senior VPs and Dan Snyder for approval,” she said.

Johnston was one of five women who presented stories of alleged sexual harassment and discrimination to the House Committee on Oversight and Reform.

“The NFL is now complicit in this scandal,” Melanie Coburn, a former director of marketing for the team, told Congress. “Ten months, more than 120 witnesses and nothing. [NFL commissioner] Roger Goodell’s claim that he was trying to protect us is outrageous and cowardly. The public optics of him caring is appalling. Goodell betrayed every woman who suffered harassment and abuse at the Washington football team.”

The NFL’s spokesman responded, “Today’s testimony underscores that all employees deserve a workplace that is free from harassment of any kind and where they feel safe reporting misconduct.”