US Open Victory At Oakmont Lifts Dustin Johnson To Third In Rankings - uSports.org 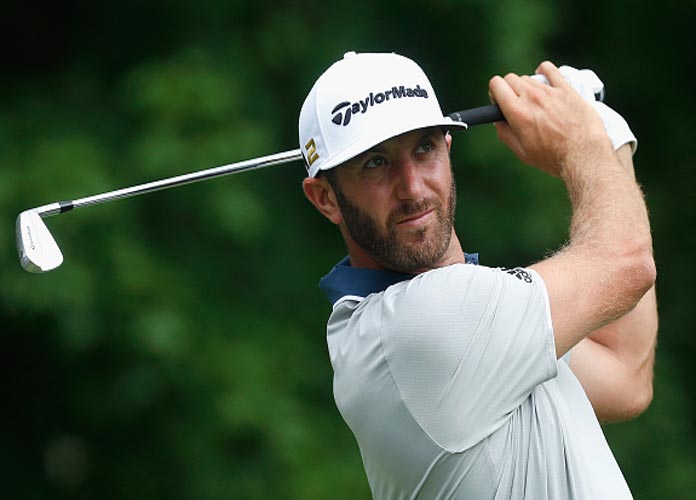 DUBLIN, OH - JUNE 05: Dustin Johnson watches his tee shot on the 14th hole during the final round of The Memorial Tournament at Muirfield Village Golf Club on June 5, 2016 in Dublin, Ohio. (Photo by Matt Sullivan/Getty Images)

Dustin Johnson’s first major victory at the 116th US Open at Oakmont Country Club in Pennsylvania on Sunday lifted the South Carolinian back into the top three of the world golf rankings for the first time since his Chambers Bay meltdown just one year ago.

Johnson, 31, completed a final round of 69 for a winning total of four-under-par 276, winning the title by a three-shot margin despite controversially receiving a one-stroke penalty after his ball moved on the fifth green.

He now sits behind Australian Jason Day (No. 1) and fellow American Jordan Spieth (No. 2), who retained their spots.

Rory McIlory– the former world number one from Northern Ireland– who missed the cut at Oakmont, dropped one place to fourth, thus falling out of the top three for the first time since July 13, 2014, just one week before he won the Open Championship at Royal Liverpool.

With the July 11 deadline for Olympic qualification nearing, Johnson looks ready to join Speith, Bubba Watson (5th) and Rickie Fowler (6th) on the American team for the Rio Games, which begin on Aug. 5.

Johnson’s triumph came after two second-place finishes in the tournament, including when he three-putted from 12 feet on the final hole to hand last year’s title to Spieth by a single shot.

On the fifth hole of the final round, Johnson ran a seven-foot birdie putt four feet past the cup. As he prepared to hit his second putt, Johnson took some practice strokes beside his ball. As he stepped in to finally putt the ball– but before he grounded the club– Johnson noticed his ball had moved slightly. Thus, he rapidly called in rules official Mark Newell. Johnson told him that the ball moved a bit backward, but he had not addressed his putt by grounding his club. Newell confirmed with Johnson “and you didn’t address it?”

At that point, playing partner Lee Westwood confirmed Johnson’s view and Newell determined that a rule had not been broken. Thus, Johnson played on.

Around the time Johnson reached the ninth hole, however, Jeff Hall, managing director of rules & competitions for the USGA, had video brought to his attention that he said had caused concern. After extensively reviewing the video and consulting with Thomas Pagel, USGA senior director of Rules of Golf and Amateur Status, the pair met Johnson on the 12th tee, where the young golfer arrived with a one-stroke lead. They informed Johnson that the USGA had reviewed video and that officials needed to discuss with Johnson the possibility he may have caused his own ball to move on the fifth green. “We told him he could very well be assessed a one-stroke penalty,” Hall said.

Johnson crushed a drive on the 12th hole more than 350 yards. He later said that the rules issue didn’t weigh on him as he played on. “I just told myself, we’ll worry about it when we get done,” said Johnson, who felt he was safe because he had not grounded his club behind the ball. “I didn’t think I was going to be penalized. They said they were going to review. There was nothing I could do about it. Just focus on this next shot. I tried to do that from there, all the way to the house. It was just me and the golf course.”

Johnson’s shooting on the subsequent holes proved to be weaker. On the par-4 14th, he three-putted and by this time, the other contestants had been informed of a potential penalty. Shane Lowry, Sergio Garcia and Scott Piercy all began making mistakes, perhaps because they were distracted by this news.

On the Fox broadcast, analysts Paul Azinger and Brad Faxon were both adamant in their view that Johnson had done nothing to cause his ball to move.

Three of the top aforementioned golfers took to Twitter to express their frustration and confusion with the USGA for calling a penalty on Johnson, seemingly siding with the eventual champion:

This is ridiculous… No penalty whatsoever for DJ. Let the guy play without this crap in his head. Amateur hour from @USGA

Lemme get this straight.. DJ doesn’t address it. It’s ruled that he didn’t cause it to move. Now you tell him he may have? Now? This a joke?

.@JordanSpieth @McIlroyRory w/ you boys! The fact that the @usga thinks that DJ caused the ball to move is completely ridiculous! Laughable!

PHOTO: DUBLIN, OH – JUNE 05: Dustin Johnson watches his tee shot on the 14th hole during the final round of The Memorial Tournament at Muirfield Village Golf Club on June 5, 2016 in Dublin, Ohio. (Photo by Matt Sullivan/Getty Images)