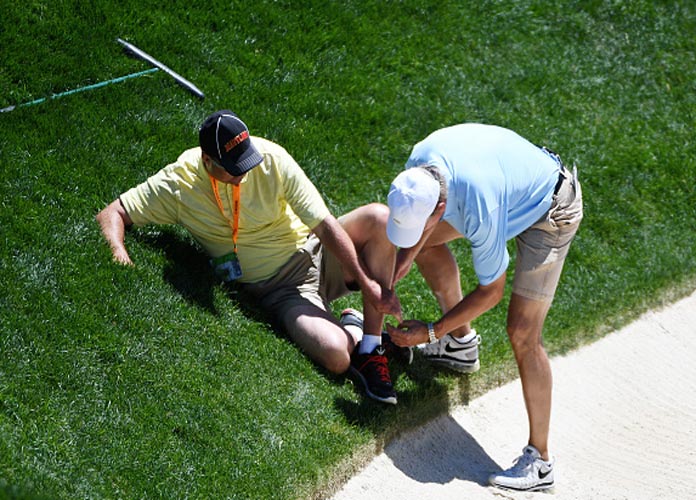 OAKMONT, PA - JUNE 14: Christopher Crawfords' caddie gets medical attention after injuring himself during a practice round prior to the U.S. Open at Oakmont Country Club on June 14, 2016 in Oakmont, Pennsylvania. (Photo by Ross Kinnaird/Getty Images)

The Oakmont Country Club golf course in Pensylvannia, venue of this year’s U.S. Open, is proving to be as difficult as Phil Mickelson said it would be just a few days ago.

Amateur golfer Chris Crawford, who is playing in his first major tournament, watched his second string-caddie Bill Henaghan go down after injuring himself on the course on Tuesday during a practice round for the Open. As Australian Jason Day was lining up his shot on the 6th hole, Crawford’s caddie slid down a grass slope into a bunker right behind the PGA Championship winner, breaking his ankle in the process.

And yet, despite the great amount of pain he surely felt, Henaghan did not forget proper golf etiquette and suppressed his cries until Day, the World No. 1 and favorite to win the U.S. Open, finished his shot.

Day, however, stopped preparing his shot and decided to help the caddie instead of completing his round.

Pittsburgh Steelers team doctor Jim Bradley was walking with the group and evaluated the caddie.

“The guy just broke his ankle. It was pretty obvious what had happened,” Bradley said, according to Golf Channel.

As Crawford’s “Tuesday caddie” recovers, the young golfer must now quickly find a replacement before the tournament kicks off on Thursday. Hopefully, this incident won’t scare off too many other caddies.

Day, 28, also shared this photo on Twitter of Crawford and his caddie after the latter had finished being attended to:

OAKMONT, PA – JUNE 14: Christopher Crawfords’ caddie gets medical attention after injuring himself during a practice round prior to the U.S. Open at Oakmont Country Club on June 14, 2016 in Oakmont, Pennsylvania. (Photo by Ross Kinnaird/Getty Images)