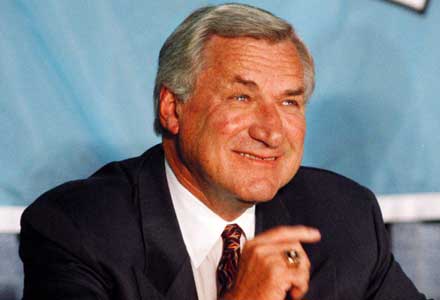 Dean Smith, the North Carolina basketball coach who led UNC for 36 years and to two national titles, as well as the 1976 US Basketball team to an Olympic gold medal, died peacefully on Saturday night at his North Carolina home. He was 83.

Smith had been battling through health issues since 2010 and had developed a memory loss condition. Because of this, Smith kept out of the public eye for the final years of his life and stayed around his family.

Smith’s coaching career was prolific, spanning 36 years with the Tar Heels from 1961 to 1997. During that period he coached some of the greatest players in the game, including Michael Jordan. He retired with a record of 879-254, which at the time set a record for the most wins by a D-1 coach. Smith had only one losing season, his first, through his entire career and had the Tar Heels finish in the top 3 of the ACC standings in each of his final 33 seasons as coach. UNC would win 17 ACC regular season titles and 13 ACC Tournament championships with Smith at the helm. He also had great success in the NCAA Tournament, leading UNC to 11 Final Fours and two national championships, coming in 1982 and 1993.

In addition to being one of the sport’s best coaches, Smith was a leader in many facets of the sport. He’s known for being on the forefront of civil rights as being one of the first to recruit African-American athletes in the South. That included bringing in Charlie Scott, the first black athlete to receive a scholarship from the University of North Carolina. His innovative coaching techniques led the Tar Heels to success on the court, but his “Carolina Way” also led his players to great heights off of it. 95 percent of Smith’s players went on to graduate from UNC, which has a reputation of being one of the nation’s elite public universities.

Tributes were outpouring on Sunday for the coach, including a gathering of hundreds of UNC students in front of the Dean Smith Center last night. Many basketball legends also told their condolences towards Smith’s death by remembering the man for the work he did.

“Other than my parents, no one had a bigger influence on my life than Coach Smith,” Michael Jordan said in a statement. “He was more than a coach – he was my mentor, my teacher, my second father. Coach was always there for me whenever I needed him and I loved him for it. In teaching me the game of basketball, he taught me about life.”

Current UNC head coach Roy Williams, who served as an assistant to Smith, told the press that “we lost one of our greatest ambassadors for college basketball for the way in which a program should be run. We lost a man of the highest integrity who did so many things off the court to help make the world a better place to live in. He set the standard for loyalty and concern for every one of his players, not just the games won or lost. He was the greatest there ever was on the court but far, far better off the court with people.”

President Barack Obama also released a statement. “Coach Smith showed us something that I’ve seen again and again on the court – that basketball can tell us a lot more about who you are than a jumpshot alone ever could,” he wrote. “He graduated more than 96 percent of his players and taught his teams to point to the teammate who passed them the ball after a basket. He pushed forward the Civil Rights movement, recruiting the first black scholarship athlete to North Carolina and helping to integrate a restaurant and a neighborhood in Chapel Hill. And in his final years, Coach Smith showed us how to fight an illness with courage and dignity. For all of that, I couldn’t have been prouder to honor Coach Smith with Medal of Freedom in 2013.”

Smith is survived by his wife Linnea, five children, seven grandchildren, and a great-granddaughter.