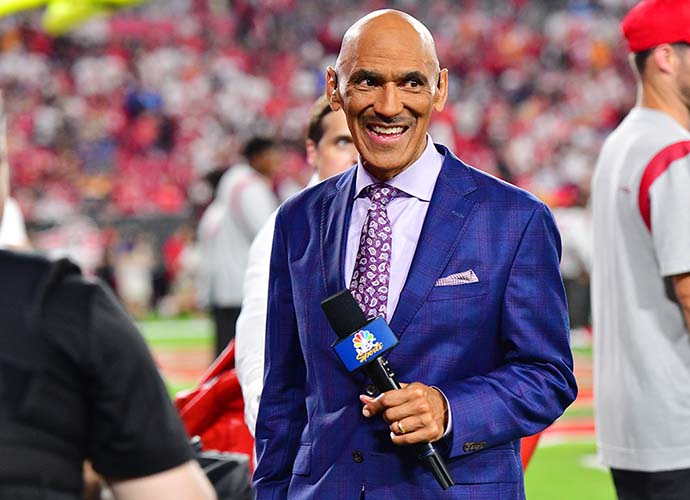 TAMPA, FLORIDA - SEPTEMBER 09: Tony Dungy looks on prior to a game between the Tampa Bay Buccaneers and the Dallas Cowboys at Raymond James Stadium on September 09, 2021 in Tampa, Florida. (Photo by Julio Aguilar/Getty Images)

Tony Dungy‘s actions have sparked some ire amongst fans and social media.

The NBC football analyst attended and spoke at the annual March For Life rally, which primarily opposes abortion.

One of the biggest issues fans and social media users had was Dungy using Buffalo Bills’ safety Damar Hamilton‘s near-death experience injury to support the cause.

“An unbelievable thing happened that night, with millions of dollars of ticket money and advertising on the line,” the former Indianapolis Colts and Tampa Bay Buccaneers head coach said at the rally.

“Why? because a life was at stake and people wanted to see that life saved. “Every day in this country, innocent lives are at stake. The only difference is they don’t belong to a famous athlete, and they’re not seen on national TV.”

Former NFL coach Tony Dungy invokes Damar Hamlin’s cardiac arrest as he calls on Americans to pray for an end to abortion:

“Every day in this country, innocent lives are at stake. The only difference is they don’t belong to a famous athlete, and they’re not seen on national TV.” pic.twitter.com/RR6G6c5VfE

And many on social media took exception to his comments.

One said: “Absolutely tasteless for Tony Dungy to use Damar Hamlin’s near-death experience like this.”

And some called for his firing including political and sports journalist Keith Olbermann.

He tweeted: “if you have any remaining concern for your operational reputation, fire Tony Dungy now. He is using you.”

Another said: “Hey @NBCSports it’s time to fire @TonyDungy he is a hate-filled bigot and needs to go!”

And of course, many are taking into account that this isn’t Dungy’s first time that he’s sparked controversy over his religious beliefs.

In fact, the 67-year-old in recent days deleted a tweet that alleged litter boxes are being put in schools for students that identify as cats.

These claims are unfounded and have been debunked by a number of school districts.

Also, Dungy said in 2014 that he wouldn’t have drafted the first openly gay player Micahel Sam because he would be a “distraction.”

And most Americans support a women’s right to choose.

A survey by Pew Research Center shows that 61% of adults agree abortion should be legal in all or most cases.

Dungy reportedly will be on the air for NBC on Saturday despite the recent outrage he has caused.