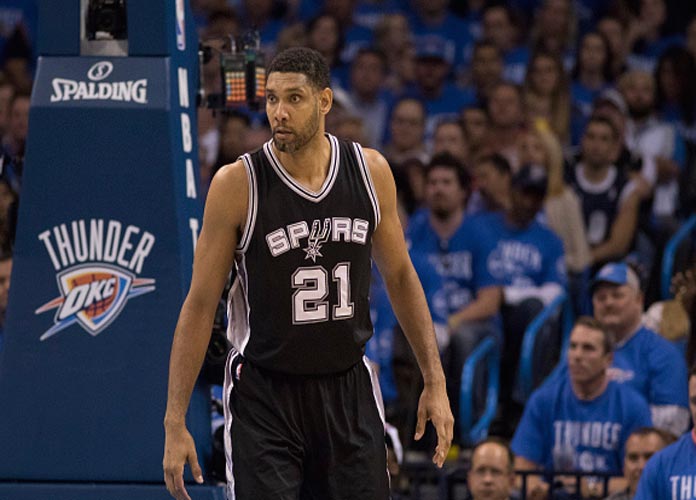 OKLAHOMA CITY, OK - MAY 12: Tim Duncan #21 of the San Antonio Spurs waits for the Oklahoma City Thunder to bring the ball down court during the second half of Game Six of the Western Conference Semifinals during the 2016 NBA Playoffs at the Chesapeake Energy Arena on May 12, 2016 in Oklahoma City, Oklahoma.

NBA Hall of Fame power forward Tim Duncan is returning to basketball following a three-year absence since his retirement as a player in 2016. The lifelong San Antonio Spur will be joining Gregg Popovich’s team as an assistant coach beginning in the upcoming 2019-2020 NBA season.

“It is only fitting, that after I served loyally for 19 years as Tim Duncan’s assistant, that he returns the favor,” head coach Gregg Popovich said in a team statement.

Duncan, 43, played his entire 19 season NBA career for the Spurs. For his career, Duncan averaged 19.0 points, 10.8 rebounds, and 2.2 blocks per game on 50.6% shooting from the field. Drafted as the 1st overall pick of the 1997 NBA Draft by the Spurs out of Wake Forest, Duncan led the Spurs to win five NBA titles during his playing career alongside great players like David Robinson, Tony Parker, Kawhi Leonard, and Manu Ginobli. Duncan finished his career making 15 NBA All-Star teams, winning three NBA Finals MVP’s, and two NBA regular season MVP’s. Duncan also recently had his number 21 jersey retired by the Spurs. It is only fitting that Duncan begins his NBA coaching career with San Antonio.

Popovich and Duncan have shared a great deal of respect for one another since Popovich visited Duncan at the Virgin Islands in 1997 for a pre-draft interview.

“We lived on the beach for a few days and we swam and we talked,” Popovich said at Duncan’s retirement ceremony. “From that moment, I knew he was a special individual because he basically talked about everything but basketball. And we’ve been the recipients of that intelligence and that outlook on life since he’s walked in here.”

Tim Duncan's story from the day Manu got drafted is pure comedy 🤣 pic.twitter.com/I0fEfmFcwA