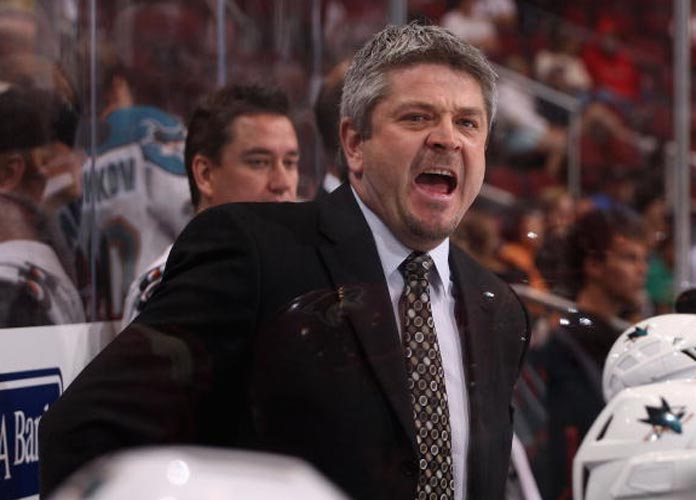 GLENDALE, AZ - SEPTEMBER 26: Head coach Todd McLellan of the San Jose Sharks reacts to a call during the preseason NHL game against the Phoenix Coyotes at Jobing.com Arena on September 26, 2009 in Glendale, Arizona. The Coyotes defeated the Sharks 2-0. (Photo by Christian Petersen/Getty Images)

Todd McLellan, head coach of Team North America, gave very clear instructions to his age-23-and-younger players from the U.S. and Canada at their second World Cup of Hockey 2016 practice: to work on speed.

At one point, McLellan said he wanted a drill to be performed at “game speed, not summer speed.”

“Well, we’re trying to jam a lot of information into three days,” McLellan said. “You know, we play in three days, and we’re trying to give them simple structure and give them an idea of what … we’re trying to predict what might happen on the ice for each of them. After that, we’re turning them loose and we’re going to get them going. So we’re walking them through situations, whether it’s the power-play breakout, it’s our one opportunity.”

Team North America, which includes five players who were the No. 1 pick in the NHL Draft, including Connor McDavid (2015) and Auston Matthews (2016), has one more practice remaining before playing its first pre-tournament game against Team Europe in Quebec City on Thursday.

“I think everybody’s really looking forward to it,” said Matthews, who was drafted by the Toronto Maple Leafs and is set to make his NHL debut next month. “You know, have a good week of practice and then we’ll be able to go measure ourselves against a really good team. It’s going to be a good challenge for us.”

For the second consecutive day, McLellan spent a solid part of practice clearly stating what he wanted accomplished, thanks to help from assistants Jon Cooper, Gerard Gallant, Dave Tippett and Jay Woodcroft.

“We’re laying our foundation now, and then we believe we can grow it as we go along, but like I told our guys, if we’re in, for argument’s sake, first grade right now as far as the power play goes, we’ve got to get to grade 5 here quite quickly,” McLellan said. “But we’re not getting there unless we get the basics down.”

During the second half of practice, the team focused on power plays. McDavid centered one unit with defenseman Aaron Ekblad and forwards Jack Eichel, Brandon Saad and Mark Scheifele.

Eichel, 19, was selected No. 2 by the Buffalo Sabres in the 2015 NHL draft after McDavid was chosen by the Edmonton Oilers.

GLENDALE, AZ – SEPTEMBER 26: Head coach Todd McLellan of the San Jose Sharks reacts to a call during the preseason NHL game against the Phoenix Coyotes at Jobing.com Arena on September 26, 2009 in Glendale, Arizona. The Coyotes defeated the Sharks 2-0. (Photo by Christian Petersen/Getty Images)