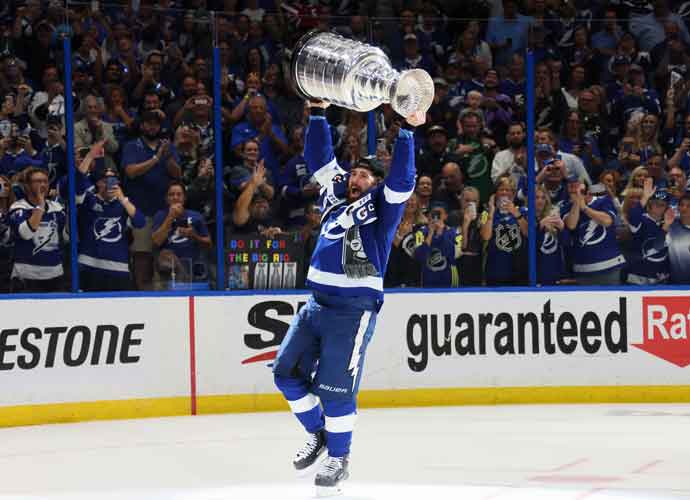 TAMPA, FLORIDA - JULY 07: Pat Maroon #14 of the Tampa Bay Lightning hoists the Stanley Cup after the 1-0 victory against the Montreal Canadiens in Game Five to win the 2021 NHL Stanley Cup Final at Amalie Arena on July 07, 2021 in Tampa, Florida. (Photo by Bruce Bennett/Getty Images)

Six NHL teams’ operations have been shut down, 27 games have been postponed and there will be no cross-border games from Monday through Thursday this week. There were 12 scheduled games between U.S. and Canadien teams this week that will be added to the tally of games to be rescheduled.

The NHL and the players’ association have announced that teams will continue to play their regularly scheduled games, and those that can’t be played will be made up at a later date. They also reiterated that although there has been a spike in positive cases, there have been low numbers of those cases producing any serious or concerning illnesses. On Saturday, around 10% of the NHL’s 700 players were in COVID protocol.

“We were just off the ice and we heard about it,” New York Islanders forward J-G Pageau said. “The NHL, the NHLPA took the decision. Obviously, we love to play here in front of our fans. We feel good about our game and the past few games, it’s something that’s out of our control. I’m sure they made the decision to make sure that everyone’s safe with their family.”

With the holidays coming up, teams want to make sure that their players can safely be at home with their families, and especially keep young children and elderly members of their family healthy. Players and coaches around the league have voiced that although the changes might be different to past seasons, they are grateful that the protocols are in place.

“What’s strange for us … is that we have players for the most part that are feeling perfectly fine that are being pulled from the game,” said Los Angeles Kings‘ head coach Todd McLellan. “We’ve got a bit of a flu bug, cough, the typical winter stuff going through our team. Those players are playing, which is odd, but I get the protocols. I get the health directives, and I do believe we’re in good hands.”