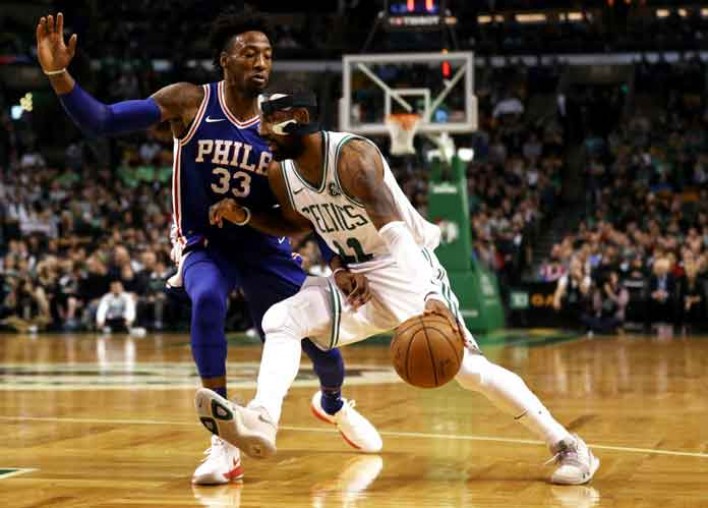 This past Wednesday, the Philadelphia 76ers beat the Boston Celtics 118- 116 in what proved to be a very promising matchup. With the playoffs approaching, both teams were looking to stay sharp going into the postseason.

Joel Embiid had a very dominant night, finishing with 37 points and 22 rebounds, while Jimmy Butler also came up big, scoring 22 points. Fifteen of Embiid’s points came in the fourth quarter.

Boston had been dominating the season series so far, beating the Philadelphia 76ers all three of the times they had played this season. Throughout the season — despite being dominant at home — the Sixers have not been able to get a win over the Celtics this year.

This is one of the reasons why several analysts and members of the media doubted the 76ers had a chance at beating the Celtics when the playoffs came around.

Being conference rivals, things got a bit heated during the game when Celtics guard Marcus Smart and premier big man Embiid got into it.

👀 Joel Embiid shoved by Marcus Smart who gets ejected

After the two collided, Smart stood up in anger and shoved the Sixers big man to the floor. Players and the referees immediately broke up the fight and separated the two as Smart was then thrown out the game, Embiid only received one technical. But that shove had ignited the 76ers and Embiid.

Boston led by as many as 15, including a 12-point lead in the third quarter. After Smart’s ejection, the 76ers went on a run and ended the the third quarter down only five points. “Stuff like that, it gets me going, it gets the crowd going,” said Embiid, who later called the two-handed shove “a cheap shot.” “Everybody knows that I play better when the crowd is involved, so that energy was definitely good for us.”

It’s no secret that Embiid is definitely an energy guy, and likes to feed off of the crowd cheering him on and intense moments within the game. In addition to scoring 37 points in the win, he came up with a clutch block on Kyrie Irving, who had finished the game with 36 himself.

What a recovery from Joel Embiid with the game on the line 💪 pic.twitter.com/v9mHjhpOgT

Jimmy Buckets does it again

The fourth quarter was all Jimmy Butler through, as the guard was one of the catalysts for this win.

The man of the fourth quarter, Jimmy Butler catches up with @SerenaWinters after he goes off and the Sixers finally defeat the Celtics! pic.twitter.com/3hfvennz44

Embiid, feeling dominant after the win, called himself “the most unstoppable player in the league.”

What a recovery from Joel Embiid with the game on the line 💪 pic.twitter.com/v9mHjhpOgT

After gaining their first win of the season against their conference rivals, this gives the 76ers the confidence they need heading into the playoffs, where these two teams are likely to meet again.