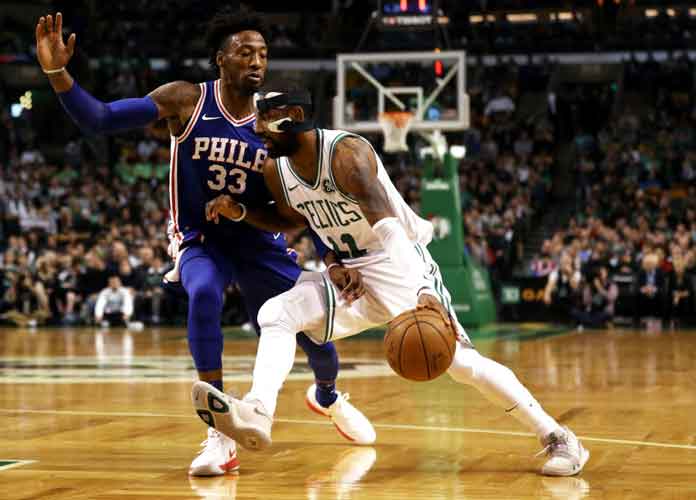 Kyrie Irving is hoping to rest his sore left knee even longer than initially expected.

The Boston Celtics All-Star point guard — who will be 26 on March 23 — missed last week’s game in Chicago, and then sat out the second half of Sunday’s 99-97 loss to Indiana.

Boston — which was already missing All-Star Al Horford (illness) and Jaylen Brown (concussion) — blew a 12-point lead against the Pacers on Sunday.

Irving added that, with more than a month before the playoffs begin, he is not overly concerned about his achy knee, which he stated he first felt pain in during a March 3 loss to Houston, in which he played 35 minutes. The Celtics (46-21) firmly stand at No. 2 in the Eastern Conference, and trail Toronto by just 3.5 games. Boston is seven games ahead of the third-place Pacers.

“I’m not concerned. Where we are in the season, I’m pretty comfortable,” Irving said. “I think that, competitively, I think that’s more or less what I’m concerned about. When I actually do get back on the floor, I want to feel the level I expect myself to be at and I want to play at and being able to sustain it. Right now, I’m not able to do that. I just got to do that.”

Irving previously sustained a fractured kneecap during the 2015 Finals, which an injury that ultimately required surgery.

When asked if he might eventually need more work on his knee, Irving said he was unsure.

To add to the Celtics’ woes, Marcus Smart was diagnosed with a torn thumb ligament on Monday afternoon.

Irving is se to star in the upcoming comedy film Uncle Drew , based on Irving’s titular character in Pepsi Max’s series of advertisements. The film — which stars several former NBA stars including Shaquille O’Neal, Reggie Miller and Chris Webber — will be released in June.

BOSTON, MA – NOVEMBER 30: Kyrie Irving #11 of the Boston Celtics drives against Robert Covington #33 of the Philadelphia 76ers during the first quarter at TD Garden on November 30, 2017 in Boston, Massachusetts.(Photo by Maddie Meyer/Getty Images)