Steve Kerr On Warriors' 142-94 Loss To Mavericks: 'Flush It Down The Toilet' - uSports.org 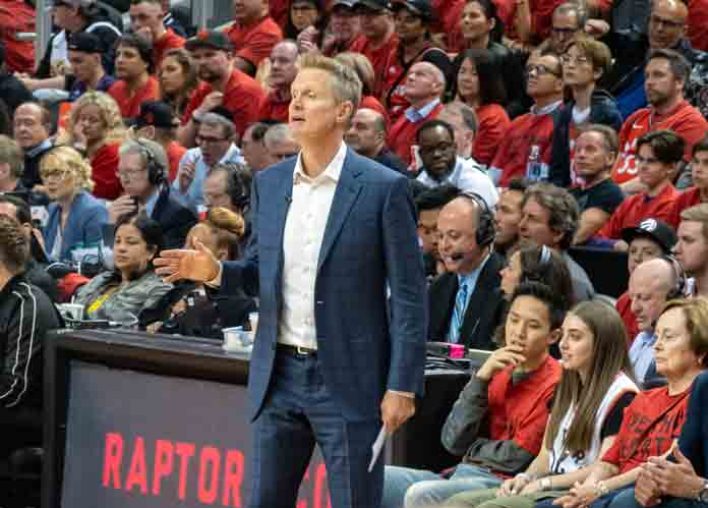 Steve Kerr On Warriors’ 142-94 Loss To Mavericks: ‘Flush It Down The Toilet’

Steve Kerr made clear after the Golden State Warriors‘ 142-94 road loss to the Dallas Mavericks on Wednesday night that he doesn’t think it’s worth watching film of the game to take away anything.

“Flush it down the toilet,” Kerr said after the loss, per The Athletic’s Anthony Slater. “Literally, you just move on. You don’t take anything from a game like this. We’re not going to be watching tape on this one. Move on to Utah on Friday.”

Many Warriors fans undoubtedly have similar feelings about this season overall. Golden State is 3-13 and dead last in the Western Conference, an extremely weak run for a team that has won three of the last five NBA championships and that three years ago set a league record by recording 73 wins in a season. However, Kerr’s comments and the Warriors’ track record thus far are not surprising given all the setbacks the team has faced this year. Stephen Curry, Klay Thompson, D’Angelo Russell and Draymond Green are all injured, while Kevin Durant and DeMarcus Cousins both left the team during the offseason.

Kerr at least had this to say on Wednesday about how the team’s veterans have helped keep a good atmosphere in the locker room:

Steve Kerr on how the vets have helped keep the locker-room mood light: pic.twitter.com/9Hxkpz4U0r

On Wednesday, rookie power forward Eric Paschall — a second-round draft pick out of Villanova — led the Warriors in scoring with 17 points. Unfortunately, this wasn’t enough to save Golden State from a brutal loss to Dallas. Mavericks star Luka Doncic also logged a triple-double on Wednesday — his second one this week — after finishing with 35 points, 11 assists and 10 rebounds in just 26 minutes of play.

The Warriors will next face a tough challenge against the Jazz (9-5) in Utah on Friday.