Seahawks DK Metcalf Goes Back To Huddle After Ejection - uSports.org 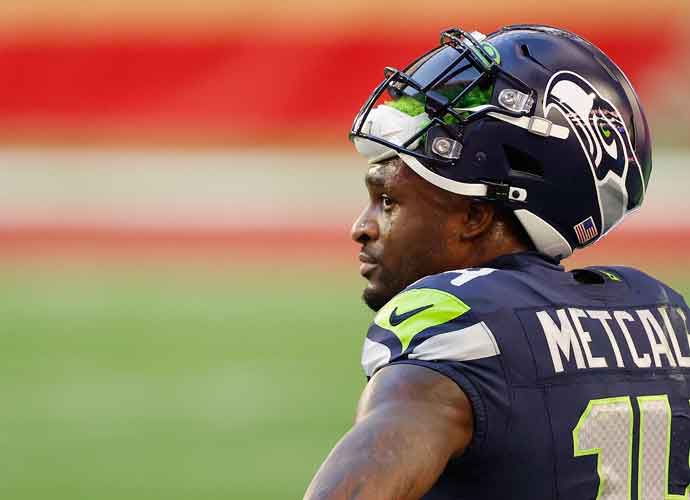 GLENDALE, ARIZONA - JANUARY 03: Wide receiver DK Metcalf #14 of the Seattle Seahawks watches from the sidelines during the first half of the NFL game against the San Francisco 49ers at State Farm Stadium on January 03, 2021 in Glendale, Arizona. (Photo by Christian Petersen/Getty Images)

Seahawks DK Metcalf Goes Back To Huddle After Ejection

Seattle Seahawks wide receiver DK Metcalf was ejected from Sunday’s against the Green Bay Packers game after he got into it with multiple Packers defenders, aggressively grabbing their facemasks. After the ejection, Metcalf was seen trying to stay in the game, appearing in Seattle’s huddle.

This instance came with 1:19 left in the game, so it was not an impactful ejection as the Packers were already up 17-0 on their way to a shutout victory.

#Seahawks WR DK Metcalf has been ejected after this altercation with #Packers DB Henry Black.pic.twitter.com/Ry1jdhIOpd

And on the next play, as Russell Wilson was calling the play in the huddle, Metcalf snuck back into the huddle, listening for the play, even though he had just been ejected.

Awkward: DK Metcalf got ejected and then tried to go back in the game. Ref told him to get off the field.pic.twitter.com/o7rmceexXZ

Awkward: DK Metcalf got ejected and then tried to go back in the game. Ref told him to get off the field.pic.twitter.com/o7rmceexXZ

“Tired of losing,” Metcalf said in his press conference.

Seattle’s offense had stalled throughout the entire game against the Green Bay defense, and Metcalf’s frustrations had finally boiled over. He recorded three catches for 26 yards, totaling eight targets, as the Seahawks were shut out in Wilson’s return from a finger injury. Wilson completed 20 of 40 passes with two interceptions after a recovery that sped past projected timelines. Wilson added postgame: “I don’t think DK is emotional. I think he’s passionate.”

“I think as an offense, we just kind of struggled just to get the ball moving. Some throws were off, some throws were there. I know I had a couple of key drops that I should’ve caught,” Metcalf said.

The loss dropped Seattle to 3-6 on the season, putting them in danger of missing the playoffs. The Seahawks’ chance to rebound will come against the Cardinals on Sunday.

After Two-Year Absence, Earl Thomas Wants Back In The NFL: ‘I’m Ready’