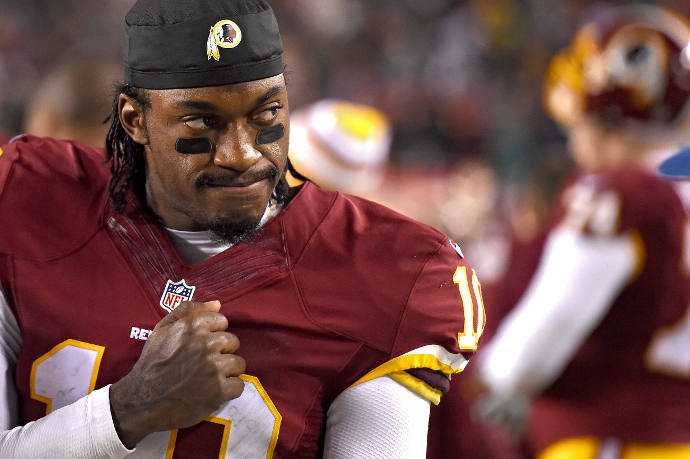 Caption:LANDOVER, MD - DECEMBER 20: Quarterback Robert Griffin III #10 of the Washington Redskins acknowledges the crowd as time expires in the fourth quarter against the Philadelphia Eagles at FedExField on December 20, 2014 in Landover, Maryland. The Washington Redskins won, 27-24. (Photo by Patrick Smith/Getty Images)

To some players, like the Patriot’s Jimmy Garoppolo, the preseason is a time to earn respect and prove that you are NFL quality. To others, like Washington Redskins quarterback, Robert Griffin III, it’s a time to talk the talk, and then keep talking.

While RGIII was speaking to Washington ABC’s affiliate, Alex Parker, he stated why it was that he is the best quarterback in the league. He said,

I don’t feel like I have to come out here and show anybody anything or why I’m better than this guy or better than that guy. It’s more about going out and affirming that for me, I go out and I play, I know I’m the best quarterback on this team. I feel like I’m the best quarterback in the league and I have to go out and show that. Any athlete at any level, if they concede to someone else, they’re not a top competitor, they’re not trying to be the best that they can be. There’s guys in this league that have done way more than me. But, I still view every single day.

Over his career in the NFL, RGIII has had a solid showing with a career 8,097 passing yards for 40 touchdowns on a 90.6 rating. However, his rating is slowly decreasing year by year, as his average was already high due to his strong performance his rookie year, with a 102.4, beating out fellow rookie Andrew Luck. But that is where he could have made that statement. Because in 2012, people were speaking highly of his throwing ability coupled with his rushing speed. But now, he is just an afterthought in a league of stronger quarterbacks. So, is he the best quarterback in the league? Maybe in a niche event, like a skills test or a 500 meter dash, but overall, it has yet to be seen.