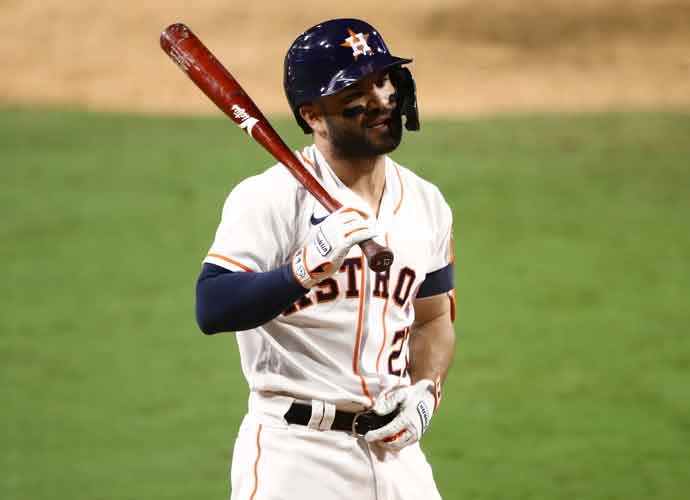 SAN DIEGO, CALIFORNIA - OCTOBER 13: Jose Altuve #27 of the Houston Astros reacts to a strike out call during the ninth inning against the Tampa Bay Rays in Game Three of the American League Championship Series at PETCO Park on October 13, 2020 in San Diego, California. (

I don’t think anybody feels for the Astros or their fans. Houston was probably the one team that had a legitimate positive aspect of the MLB season being reduced and closed to fans because if things were normal, they would have been abused this year. Over the offseason, a massive cheating scandal broke about the Astros using electronics to steal pitch counts during their 2017 World Series run, and while the MLB and Rob Manfred refused to dole out the appropriate punishment, many thought that players and fans would dole out their own versions of vigilante justice. But alas, that justice has come in the form of a metaphorical, sports beating, with the Tampa Bay Rays dominating them in the first three games in their ALCS series.

A big throughline of the game was that Astros’ star second basemen Jose Altuve developed a case of the yip with four throwing errors throughout the game, a massive number especially for someone of Altuve’s skills. “We’re giving him all the support that we can,” Astros manager Dusty Baker said. “Nobody feels worse than Jose. He takes it very seriously, and he takes it to heart. He’s one of ours, and we’ve all been through this before. Maybe not in the spotlight like this. It hurts us all to see him hurting.”

Anything can happen in baseball but it seems like this series is all but over. The Astros will need to turn things around and fast if they want to get back into this series, but I doubt any non-Houston fans will shed a tear if they decide not to.