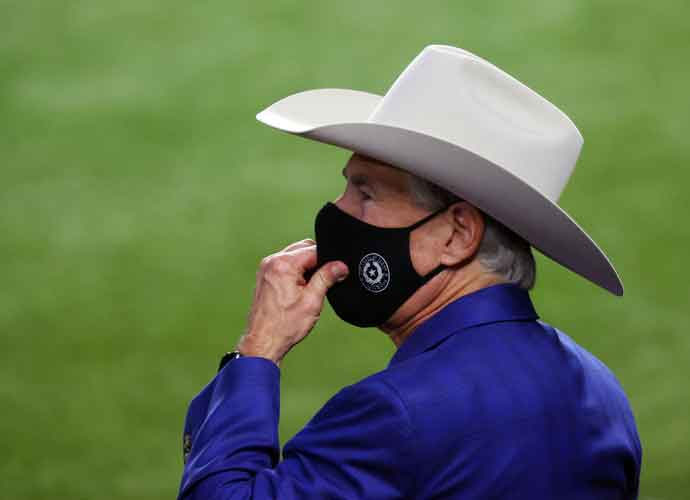 ARLINGTON, TEXAS - OCTOBER 20: Governor of Texas Greg Abbott looks on prior to Game One of the 2020 MLB World Series at Globe Life Field between the Los Angeles Dodgers and the Tampa Bay Rays on October 20, 2020 in Arlington, Texas. (Photo by Ronald Martinez/Getty Images)

The Texas Rangers had one of their two wishes fulfilled on Monday. The team opened their 2021 home schedule with a stadium jam packed of fans at Glove Life Field. And they did this against a team that isn’t even allowed to play home games due to the ongoing COVID-19 restrictions.

The Toronto Blue Jays defeated the Rangers 6-2 before a crowd of 38,238 fans. Getting a packed house was easier than they thought, but winning the team’s home opener was a much bigger hurdle than expected.

Texas Gov. Greg Abbott (R) opened the state back up for full business last month. The Rangers used the reopening of the state to welcome 40,500 fans back to the stadium. Abbott was scheduled to throw out the ceremonial first pitch on Monday, however, he backed out of it a few hours before game time, claiming it was due to the fact that Major League Baseball pulled this year’s All-Star Game and MLB Draft from Atlanta because it opposed Georgia’s new voting laws.

Abbott went on to say that he would no longer participate in any events by MLB. The governor said he would “not seek to host the All-Star game or any other MLB special events.”

President Joe Biden called the team’s wish of playing in a full capacity stadium “a mistake” and something that is “not responsible.”

“Well, that’s a decision they made. I think it’s a mistake,” Biden said last week. “They should listen to Dr. [Anthony] Fauci, the scientists and the experts. But I think it’s not responsible.”

“I’m hopeful that with vaccine rollout, with mask requirements at the park, and some level of distancing—obviously, with a full crowd you’re not going to have full distancing there—I’m hopeful that provides some level of security and safety from a public health standpoint,” Rangers general manager Jon Daniels said. “But certainly we understand when the organization made that decision it was not going to be popular with everyone.

“I think it’s a one-time event. I think after opening day the reality is we’re not going to be at full capacity. I doubt it. There are very few seasons, except for our best years,” Daniels said. “I do think that the opening day, the visual and the reality of having a lot of people that close together does kind of go maybe against some of the recommendations.”