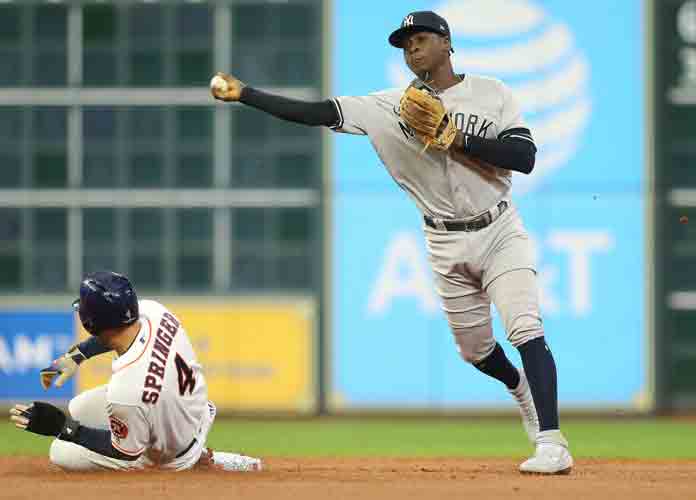 HOUSTON, TEXAS - OCTOBER 13: Didi Gregorius #18 of the New York Yankees turns a double play during the first inning against the Houston Astros in game two of the American League Championship Series at Minute Maid Park on October 13, 2019 in Houston, Texas.

The Phillies continue to make noise in free agency after signing former Yankee shortstop Didi Gregorius to a one-year deal worth $14 million. The club had just announced the signing of former Met’s pitcher Zach Wheeler for a five-year, $118 million contract on Monday.

Gregorius missed the first half of the 2019 season after getting Tommy John surgery. When he returned his numbers were below par. He finished the season batting .238 with 16 homeruns and 61RBIs compared to 2018’s .268 average with 27 homeruns and 86 RBIs through 134 games. The missed time has kept teams wary of offering him a multi-year contract.

Gregorius, now 29, took over at shortstop in New York after Derek Jeter retired in 2014. Before arriving in New York, he was viewed as a good fielder who struggled to hit well against left-handers. In 191 games for Arizona he only hit .243 and 13 homeruns, After getting traded to New York, the move seemed to help rejuvenate his career as he quickly became a fan favorite. In 660 games with the Yankees, Gregorius batted .269 and had an OPS of .795 combined with 97 homeruns and 360 RBIs. He also finished with 334 runs scored.

Yankee Manager Aaron Boone had nothing but praise when he spoke to the media at the Winter Meetings in San Diego Tuesday. “Didi has been a great player for us. He’s a great person. Teams are lucky to have him because he’s a really good player. And I think obviously going into winter where he’s healthy would expect a really full productive season from him,” Boone said.

The Dutch shortstop will be re-united with his former manager, Joe Girardi, who was hired by the Phillies in October after being out of the league for two years. Gregorius reportedly chose the Phillies over the Giants because of his relationship with Girardi, according to NBC Sports.

Philadelphia hopes to return to the playoffs for the first time since 2011.

Didi and Joe are back together.