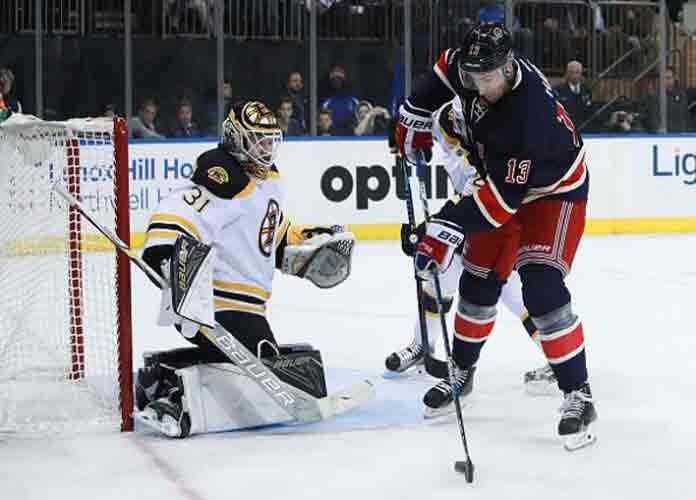 OCTOBER 26: Kevin Hayes #13 of the New York Rangers scores a goal on Zane McIntyre #31 of the Boston Bruins during the second period at Madison Square Garden on October 26, 2016 in New York City. (Photo by Michael Reaves/Getty Images)

The Flyers barely got off the ground last year, totaling just 82 points during their disappointing campaign last year. While aiming to change things for more positive results after next year’s season, Philly recently locked down 27–year-old center Kevin Hayes.

The Flyers inked a deal yesterday with Hayes, who “plays a smart, two-way game and is just entering the prime of his career,” as stated by Flyers general manager Chuck Fletcher. Hayes bounced around frequently last season, as the New York Rangers originally dealt him to the Winnipeg Jets, who then traded his negotiation rights to Philadelphia.

Hayes now cashes in as the third-highest-paid Flyer and will likely skate as the team’s number two center behind Sean Couturier next season. Hayes enters this season with most believing him as a player truly coming into his prime. During his time with both the Rangers and Jets last year Hayes put up career numbers, tallying 55 points and passing the puck effectively with a career-high 36 assists.

The contract promises to dish out a steep $50 million dollars to Hayes in exchange for his services over the next seven years. While the cap hit stemming from the contract poises to give the Flyers less economic flexibility during their upcoming seasons, the deal adds an effective offensive piece, something the team noticeably lacked last year. The deal also reunites Hayes with his former coach Alain Vigneault, who operated alongside Hayes while both served as New York Rangers from 2014–2018.

Hayes and the Flyers will look to improve on the team’s third–last place finish at the Metropolitan Division bottom last year. Philadelphia will need to keep up with rivals such as the Rangers and New Jersey Devils, both of which are already off to good starts on their rebuilding processes.