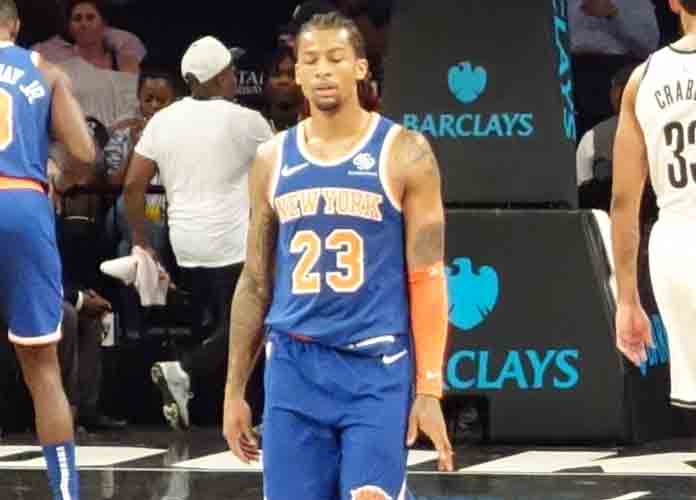 Trey Burke with the New York Knicks in 2018

Since his ninth overall selection during the 2013 NBA Draft, former Michigan Wolverine Trey Burke has tried on a lot of different NBA jerseys.

Since the Utah Jazz selected him, Burke has played for the Washington Wizards, New York Knicks and Dallas Mavericks. After agreeing to a disclosed contract earlier this week, the Philadelphia 76ers join the fraternity of teams to host Burke and his skillset.

Although remaining within the NBA remains for such an extent remains an accomplishment in its own, Burke exists as somewhat of a league disappointment, as the skillset that he flashed at the colligate level, which warranted his early selection during the draft, continually fails to translate at the NBA level. Burke’s best season only saw him record 12.8 points and 4.7 assists per-game. Numbers from other players drafted shortly afterwards, such as C.J. McCollum, Giannis Antetokounmpo and Steven Adams, all dwarf Burke’s lackluster statistical marks season after season.

However, the 76ers bought into Burke’s frequently traded stock ahead a season in which most expect the team to contend for a title. “Trey’s experience as a ball handler matched with his scoring ability makes him a good fit for our roster,” said GM Elton Brand in a public statement after the signing.

A good fit for the squad.

As so many NBA players do after signing with a new team, Burke hopped on Twitter to issue his excitement going forward. Burke even addressed the team’s championship aspirations by simply stating, “Let’s go get this championship.”

“Let’s go get this championship.” pic.twitter.com/FEzaSBg50g

Burke fell just short of an NCAA Men’s basketball title during his last year at Michigan after losing in the championship game by just six points. He now gets a chance to chase glory once more, this time at the professional level, even despite his earlier shortcomings playing at it.